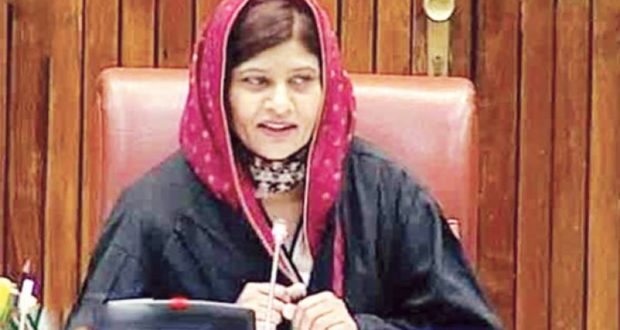 ISLAMABAD –  To commemorate March 8 as International Women’s Day, the Senate Friday unanimously passed a resolution commending the role of Pakistani women in nation building and recommended to the government to take concrete steps for women empowerment.

Pakistan Muslim League-Nawaz (PML-N) Senator Begum Nuzhat Sadiq moved the resolution which was signed by some lawmakers both from treasury and opposition benches.

Soon after the resolution, Senate Chairman Sadiq Sanjrani, in a rare precedent of the house, invited Hindu lawmaker from Sindh’s Tharparkar district Krishna Kumari Kohli Aka Keshoo Bai to chair the session for the remaining day on the occasion of women’s day.

Chairman’s decision got applause from both sides of the aisle as the senators thumped desks when Pakistan People’s Party (PPP) lawmaker took over the chair.

Before leaving the chair, Sanjrani in his message said, “Pakistan has come a long way in providing women better opportunities and making the society better, safer and more accessible for them but still there was more to be done.”

He added, “On this day, we should commit ourselves to providing the best possible

treatment to all the women in different strata of the society.”

Awami National Party (ANP) Senator Sitara Ayaz said that Pakistani women had a history as they had been struggling and raising their voice against martial laws. “Women are participating in the legislation process as well,” she added.

“People are not changing their mindset about women in Pakistan. We don’t ask for empowerment but ask to put an end to restrictions on women,” said PPP Senator Quratulain Murree, adding that women themselves would get empowerment then.

PML-N Senator Kalsoom Perveen raised the matter of harassment of women at workplace. Senator Nuzhat Sadiq demanded revival of the Violence against Women Centre in Multan which she said had almost been abandoned by the authorities.

PPP Senator Rukhsana Zuberi deplored that women had not got due empowerment in Pakistan. “We shouldn’t forget the downtrodden women including domestic workers and sanitary workers on this day,” she said and asked for establishing day care centres for children of working women in all institutions.

The chair didn’t allow the male senators to take part in the debate due to the shortage of time and prorogued the house.

Earlier, PPP staged a protest walkout from the Senate for ignoring former slain prime minister and their party leader Benazir Bhutto in the advertisement officially issued by the government to celebrate the contributions of Pakistani women on this special day.

“Unfortunately, the advertisement included Fatima Bhutto and Asma Jehangir but the government excluded the name and photograph of twice elected PM and first woman premier of the Muslim world from that advertisement,” Senator Sherry Rehman complained.

“The world has recognised Benazir Bhutto for her contributions but this government is in its myopia, hatred and exclusionary politics had not included the great leader (in the advertisement) who stood up against extremism, inequality and oppression and who worked for the right of the vulnerable and for Pakistan’s name to be heard everywhere with respect,” she said.

“We want an official apology and the government should change the advertisement by this [Friday] evening,” she warned amid clapping from both sides, before the opposition staged a protest walkout.

Leader of the House Senator Shibli Faraz explained that Benazir had contributions in the restoration of democracy and the government would look into the matter. “Her name should have been included [in the ad] but the government sometimes don’t examine things at micro level.”

The chair directed the leader of the house to check from the relevant ministry as to what actually happened.

The house also passed a motion authorising Senate chairman to nominate six senators, three each from treasury and opposition benches, for the National Assembly’s Special Committee on Kashmir.

The motion moved by Senator Shibli Faraz and endorsed by opposition leader Raja Zafarul Haq said that chairman was further authorised to make changes in the composition of the committee “as and when deemed appropriate.”

The committee will present its report to the both houses of the parliament.

Chairman Sanjrani remarked there was no representation of Senate in the committee after 2008. “Leader of House and I had gone to National Assembly Speaker Asad Qaiser to take up this matter,” he said. It was then that he speaker and government agreed to this, he added.

The Nation: To Pakistan’s Women

Dawn: Exclusion of Benazir’s name from women’s day ads to be probed