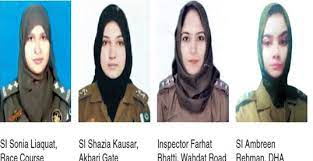 Posted by: admin in Women Development August 13, 2022 Comments Off on Woman SIs made investigation incharges 39 Views

LAHORE:Following the vision of IG, six women have been appointed as incharge investigations in the police stations in City by SSP Investigations Imran Kishwar.