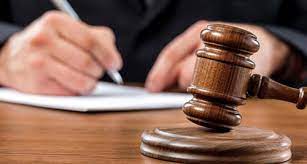 Posted by: admin in Domestic Violence August 13, 2022 Comments Off on Man jailed for depriving sisters of share in father’s property 46 Views

A session’s court has awarded a collective sentence of 21 years’ imprisonment to a man for depriving his sisters of their rightful share in inheritance through forgery and deceit.

Sohail Majeed, along with his brother Mansoor Majeed, had been charged with usurping the share of their seven sisters in their late father’s house in the city’s PECHS locality by having the property transferred to the male legal heirs, including their third deceased brother Owais, and later selling it to a builder for Rs125 million.

In January 2020, a first information report (FIR) was registered at the Ferozabad police station under sections 498-A (prohibition of depriving woman from inheriting property), 468 (forgery for purpose of cheating), 471 (using as genuine a forged document), 427 (mischief causing damage to the amount of fifty rupees), 420 (cheating and dishonesty), and 34 (common intention) of the Pakistan Penal Code (PPC).

Additional Sessions Judge (East) Muhammad Mehboob Awan announced his verdict after recording evidence and arguments of the counsel representing the parties. He sentenced accused Sohail to seven years in prison for the offence of depriving his sisters of their rightful shares in inheritance, five years for committing forgery, two years for using forged documents, five years for cheating and dishonesty, and two years for mischief. The convict was told to pay a cumulative fine of over Rs1 million or undergo additional imprisonment of one year and two months on default.

Following the pronouncement of the judgement, the convict was taken into custody and remanded to the central prison to serve out the sentences that will run concurrently. The court, however, acquitted accused Mansoor by giving him the benefit of the doubt.

In the 14-page verdict, the judge noted that the evidence available on record led him to form the inescapable view that Sohail acted with a “pre-conceived motive” to deprive his sisters of their shares in the property, and to this end, the alleged forged documents were prepared and submitted to the society’s office to transfer the property.

All the property documents, including the mutation order dated 17-11-2018, showed the names of the three brothers, he said, adding that at this juncture, a prudent mind is forced to think why the accused concealed the fact that he had sisters, who were alive.

Judge Awan further noted that in the present case all the documents had been prepared without taking on board the female legal heirs and later turned out to be forged. Not only the papers but the stamps/seals of the notary public and judicial magistrate concerned were fake, he went on. “The deprivation of female siblings of their due right of inheritance has been practised in our society for a considerable period of time, but now the honorable apex court has taken cognizance of such a malpractice and His Lordship Justice Qazi Faez Essa has even held in such a case that in the inheritance matter, production of relinquishment deed is immaterial and is used as a tool to usurp the legal as well as Shariah right of the female legal heirs by the male legal heirs, which is not permissible under the law,” the judge maintained.

He dismissed the defence counsel’s ground that the inheritance was a dispute of civil nature as unfounded, saying that if that was the case, the legislature would not have criminalised the deprivation of right to inheritance by way of amending Section 498-A of the PPC. Moreover, the sections of forgery applied in the case are closely connected with the ulterior motive of accused Sohail Majeed and commission of the instant offence.

The forged documents had no aim other than depriving the sisters of their legal inheritance bestowed upon them by the Islamic law as explained in the Holy Quran. Earlier, advocate Muhammad Ayub Chaniho, the counsel for the complainant, had claimed that the accused deprived their sisters, including his client, of their rightful shares in the property inherited by them on the death of their father in 1987.

He said the accused forged the heir-ship documents, which were later submitted to the PECHS office for the transfer of the property in the name of Sohail Majeed and other brothers. He said all the deposition of prosecution witnesses and documentary evidence available on record proved the guilt of the accused.

The state prosecution supported his contention. However, the defence counsel denied the allegations levelled against his clients, contending that they were framed in the case by the police.