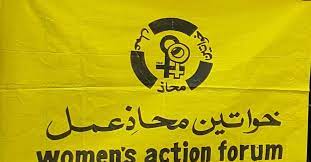 HYDERABAD: The Women Action Forum (WAF) has condemned murder of a woman under the custom of ‘karo-kari’ in Allah Bachayo Noonari village of Hyderabad and expressed its concern over the fact that despite the city having a women police station, women protection cell and shelter home none could save the woman’s life.

In a statement issued here on Friday, the forum regretted that no serious steps were taken to save the life of Rehana Solangi and act of imposing Rs100, 000 penalty obtained in a private settlement by a jirga. Ms Solangi was sent to the same house in dangerous conditions under the jirga’s decision where she was murdered, it said.

It said the WAF representatives had visited this village during mobilisation for ‘Aurat Azadi March’ and shared numbers of different government facilities with women.

WAF demanded registration of case against culprits on behalf of state so that parties should not opt for an out-of-court settlement. Five cases of domestic violence against women and their murder were reported in Hyderabad but police did not make transparent investigation, it said.