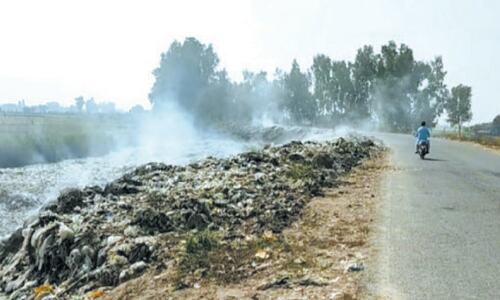 TOBA TEK SINGH: Ahmadpur Sial police (Jhang) claimed on Monday to have recovered a woman and her minor daughter and arrested two of their alleged captors.

Jhang District Police Officer Muhammad Rashid Hidayat told reporters on Monday that Muhammad Kashif of Almadina Colony had filed an application a week ago that his wife Muqaddas Iqbal (21) and his daughter Pakeeza (3) were kidnapped by five unidentified men when she visited a doctor to get medicine.

The DPO added that with the help of geofencing and modern technology police traced the the location in Bhalwal and took a facilitator, Amer, into custody who disclosed that the abductees had been kept at Faisalabad by a man Daanish. Police in a raid arrested Daanish and recovered from his custody the woman and her daughter.

He said during investigation it was revealed that main suspect was Muhammad Imran of Sharifabad locality who was allegedly forcing the woman to get divorce from her husband and marry him.

The DPO said on her refusal, he and his four accomplices bundled the woman and her daughter into a car when she was on her way to doctor.

He said raids were being conducted to arrest the main suspect and his two other accomplices. He announced prizes and certificates for the police team.