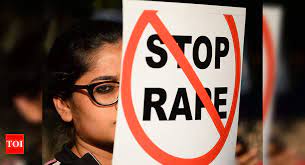 SUKKUR: Two women along with their respective husband held a press conference at the local press club on Tuesday complaining that four persons who had subjected them to gang rape about a month ago were harassing and blackmailing them.

The women, residents of Mevo Bhutto Badani village, said that they were working in fields when the four suspects subjected them to gang rape after intoxicating them with the help of a woman. They explained that they were taken to a hospital where doctors disclosed that they were drugged to facilitate rape. Later, they said they went to the police station to lodge an FIR against the suspects but the village elder restrained them from taking the matter to the police and assured them of justice. In the following days, a jirga was held and the suspects, who confessed to their crime, were ordered to pay a fine of Rs2.2 million to the affected families.

However, the women said, the suspects were now blackmailing them and also harassing them by resorting to firing in the night outside their house every now and then.

They appealed to the chief minister, police and other authorities to provide them security and take action against the suspects.