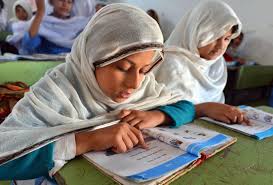 ‘PTI govt to allocate 70pc of education budget for girls’

PESHAWAR: Advisor to Chief Minister on Elementary and Secondary Education Ziaullah Bangash has said the Khyber Pakhtunkhwa government would allocate 70 percent budget of the total education budget for girls education.

He was speaking at a pre-budget seminar on State of Education Budget 2019-2020 in Khyber Pakhtunkhwa organised by Blue Veins. The adviser said no nation can progress without educating women and the PTI government was committed to promoting girls education.

He claimed that the Pakistan Tehreek-e-Insaf government has allocated 70 percent of the education budget for girls education in the upcoming budget 2019-2020.

Unveiling the upcoming education budget in the province, the advisor said that in every three new schools being established in KP, two were being set up for girls.

For the first time, he said, the KP government was going to introduce 10,000 model classrooms in the government primary schools to be well equipped.

In the upcoming budget, he said, the KP government would also recruit 9500 teachers. He said the PTI government had so far recruited 40,000 teachers through transparent NTS.

To overcome the out of schools children issue, the advisor claimed that a public-private partnership scheme would be introduced and poor children would be admitted in private schools on government expenses where there were no government schools.

For the promotion of female education, he said the government was introducing a scheme to provide pick and drop facility to female students.

The seminar called for the change of approach in economic matters and making education a priority.

It was highlighted that free and compulsory education for all children without any discrimination from age 5 to 16 is a constitutional right of every child in Pakistan and special legislation in provinces and federal capital further emphasizes the needs and makes it a priority for provincial and federal governments.

According to the budget documents, KP earmarked Rs 127.9 billion for the education sector, which is 21.2 per cent of its total budget of Rs 603 billion.

We must approach the Sustainable Development Goals, with a clear direction, a sense of purpose, and strong resolve as not only has the expansion of primary and secondary education been linked to accelerated economic growth, poverty eradication, and improved income equality but education also appears to be closely associated with social enrichment and inclusion, said KP information Minister Shaukat Yousafzai.

Member Provincial Assembly Shagufta Malik from Awami National Party (ANP) said that it was high time to bridge the gap between the government and the public education system.

Mairaj Humayun, former education minister, said that the federal and provincial governments must remain accountable and firm in their commitment to securing the right to high-quality education for every child in Pakistan especially for girls, who have long faced high barriers to education, but there remain considerable obstacles to fulfilling that commitment.

The civil society organisations demanded the sustainability of efforts and stronger political will both by the federal and provincial government and demanded to allocate 6 percent of the total GDP of Pakistan for education.

2019-05-30
Web Desk
Previous: Another woman killed for honour in Buner
Next: Woman gang-raped at Panchayat ‘decision’