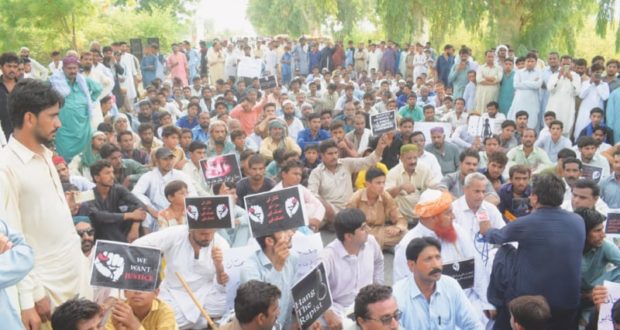 LARKANA: Relatives of a sexual assault victim and their supporters staged a sit-in on Naudero Sugar Mills bypass, demanding arrest of the rest of the suspects involved in the minor girl’s murder and including relevant sections of Anti-Terrorism Act in the FIR.

Writer Manzoor Mangi had given a call for the sit-in to register protest against the cold-blooded murder of the child, a student of class five.

They warned that if a joint investigation team comprising honest police officers was not formed within two days, the rest of the culprits were not arrested and relevant ATC sections were not incorporated in the FIR, they would stage another sit-in outside the office of SSP Larkana.

Family demands inclusion of relevant sections of ATA in FIR

Athar Abbas, president of HCBA, said that no conscientious advocate would contest the case of the assault suspect. The bar would extend moral and legal support to the bereaved family, he said.

Yaqoob Mangi, the victim’s brother, expressed dissatisfaction over investigation so far and said police were still unable to arrest the other suspect nominated in the FIR and were not sharing their findings with the family.

Manzoor Mangi said that regretfully, Bilawal Bhutto-Zardari who took notice of Zainab’s murder remained unmoved over the brutal murder of the child in his own constituency.

He demanded that police arrest the other suspect as it was incomprehensible how could only one man could stuff a dead body into a sack and dispose of it. After two hours the sit-in was called off.

The victim was allegedly strangulated to death after abortive attempt at her sexual assault in Moria Faqeer village on the left bank of Dadu Canal, 23 kilometres from here on July 24 in the jurisdiction of Naudero pol­ice station.

She had left home to buy milk from a nearby cattle pen and did not return. The relatives mounted a search for the girl and found her body stuffed in a gunny bag in a guava orchard.

Police arrested the main suspect after they detained the chairman of a union council and five others to pressure the suspects’ family to hand over the accused.

Senior Superintendent of Police Masood Bangash disclosed at a press conference late on Thursday night that the prime suspect, a student of class eight, had confessed to have killed the victim when she resisted sexual assault and raised hue and cry.

She had threatened to tell her parents about the assault after which he strangulated her to death using her dupatta, stuffed the body into a sack and threw it in a guava orchard, said the police officer quoting the suspect.

Police on Friday obtained three-day remand of the suspect from the court of fourth civil judge and judicial magistrate for further interrogation.

The SSP said when asked why ATA sections had not been inclu­d­ed in the FIR that police would soon include relevant section in the FIR.

It was learnt that accused family had left the house and moved to some undisclosed location while the relatives of the bereaved family had reportedly burnt down the house.