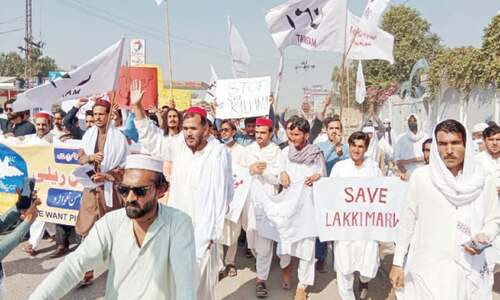 PESHAWAR: The Peshawar High Court has turned down bail plea of an accused charged with honor     -related double murder of his daughter and another person with the direction to the relevant court in Swat to conclude trial within four months.

A single-member bench consisting of Justice Dr Khurshid Iqbal was informed by a counsel appearing for the petitioner, Bahroz, a resident of Swat, that he would not press the case if direction was issued to the trial court to conclude the trial within four months.

The petitioner has already entered into a compromise with the legal heirs of his deceased daughter including his wife and the deceased woman’s husband, who had forgiven him and had given an affidavit that they had no objection if he would be set free on bail.

The accused-petitioner was arrested on May 22, 2022, when an FIR of the occurrence was registered at Kalakot police station in Swat under sections 302 and 311 of Pakistan Penal Code.

The complainant in the FIR was SHO Zahidullah, who stated that during patrolling he received information that a double murder had taken place in Achar Khwar area.

He said when he reached there he spotted a car wherein body of a man identified as Gul Rehman was lying. He added that the body was carrying marks of firearm injuries.

The SHO stated that in a nearby house, body of a young woman was also lying, who was identified as daughter of the accused. He said that he received information that the accused was suspecting her daughter of having extra marital relations with the deceased man due to which he killed both of them.

Earlier, an additional district and session’s judge in Swat had also rejected bail plea of the petitioner on September 15, observing that the record revealed that the accused was directly charged in the FIR for a dual murder and that too in the name of honour.

The judge had observed that the offence was heinous and fell within the prohibitory clause of section 497 of Code of Criminal Procedure (CrPC), therefore he could not be granted bail at that stage.

The petitioner’s counsel had stated that his client was innocent and falsely implicated in the instant case. He said that the occurrence took place at nighttime and there was no eyewitness to that.

Meanwhile, another bench consisting of Justice Mohammad Ijaz Khan rejected bail petition of an accused arrested on charges of killing his wife.

The bench observed that on tentative assessment of the available record, petitioner Ali Rehman was prima facie connected with commission of the offence and he was not entitled to the concession of bail.

The FIR of the occurrence was registered on August 7, 2017, at police station Hazrat Ghani Shaheed Kot, Malakand, on complaint of Haji Nasar Khan, father of the deceased woman, Zeenaba Bibi.

The complainant stated that the motive behind the murder was strained relations between the couple.

He stated that he was present at the house of his daughter when her murder took place. He shifted to hospital his injured daughter having multiple firearm injuries and she was later on pronounced dead.

The petitioner allegedly remained absconder for around five years and was subsequently arrested by police in August 2022.