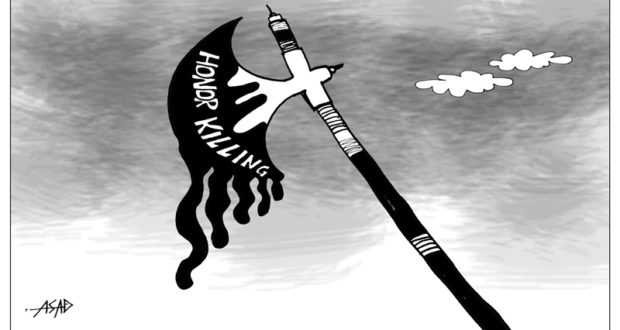 SUKKUR: A peasant gunned down his sister-in-law (brother’s wife) and the feudal lord of his village for ‘honour’ on Tuesday, officials at the Mauladad police station of Jacobabad said.

The suspect, Koro Khan Lashari, was said to be suspicious of an extramarital relation between the victims, the police and village residents said.

Lashari heard the feudal lord, Sudheer Mugheri, 24, talking to someone on his mobile phone near the Jahan Shah Pull locality and after ensuring that the person on the other side was his sister-in-law, Ameera, he rushed to his house in Nawaz Ali Mugheri village and snatched her mobile phone.

He also heard voice of the caller and confirmed that he was Sudheer.

In a fit of anger, he took out his pistol and shot dead Ameera. Lashari then went to the house of Sudheer and shot him dead as well.

Ameera was the mother of four children.

Police went to the village, arrested Koro Khan Lashari and seized the crime weapon from him. Later, he confessed to his crime, the police said, quoting him as saying that it was matter of his ‘honour’.

The police handed over the two bodies to their respective heirs after getting a post-mortem examination performed at the Jacobabad Civil Hospital.

The deceased woman’s mother speaking to the media narrated the episode that took place at her house.

She, however, claimed that Koro Lashari first shot dead Sudheer and then came to her house to kill Ameera.