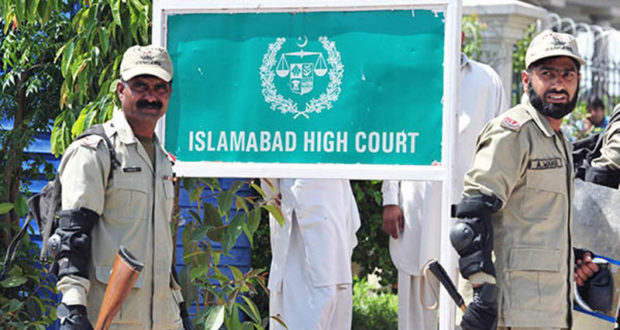 ISLAMABAD: Petitioners seeking disqualification of three members of National Assembly belonging to the PTI concluded their arguments in Islamabad High Court (IHC) on Tuesday. The court asked the lawmakers to advance their arguments on July 24.

Abdullah Khan from Islamabad and Chaudhry Mehmood Ali Hashim from Gujrat have challenged the eligibility of MNAs Maleeka Bokhari, Tashfeen Safdar and Kanwal Shauzab, saying they were dual nationals. The petitioners’ counsel argued before the court that Federal Investigation Agency (FIA) had identified Ms Bokhari as a UK passport holder. Through an affidavit in support of her nomination papers dated June 19, she stated that she had renounced her UK nationality and surrendered her passport. She claimed that the UK Home Office had also acknowledged that she had renounced her British nationality.

The petition said Ms Bokhari had referred to an email correspondence between herself, the first secretary justice and home affairs at the British High Commission in Islamabad and Dave Walsh at the UK Home Office “in support of the duly signed and stamped declaration of renunciation.” The petition said the emails were dated June 11, 2018, and Ms Bokhari had submitted her nominations papers on June 10, 2018. It contended that on the deadline set by the ECP for submission of the nomination papers, she was still a dual national.

The petition said Tashfeen Safdar had submitted her nomination papers on June 8 while an FIA report submitted to the ECP identified her as a British passport holder.

In her affidavit, Ms Safdar said she had “not ceased to be a citizen of Pakistan nor had acquired or applied for the citizenship of a foreign state.”

The petition said she held a foreign passport/nationality when she surrendered it vide a declaration of renunciation dated March 25, 2013, which was registered and effectuated/operative by the Home Office, UK, on April 4, 2013.”

It maintained that Ms Safdar had to disclose her renunciation in the affidavit dated June 8 and that “failure to do so [is] tantamount to mala fide, perjury and fabricating false evidence.”

The petition says her permanent and present addresses were in Rawalpindi and Sargodha. It said Ms Shauzab misled the ECP about her residence and registration of vote and was, therefore, ineligible for contesting the elections for the National Assembly.

The petition requested the court to direct the lawmakers to explain their position and in case the court was not satisfied with the legality of their holding public offices, the ECP be directed to de-notify them under articles 62 and 63 of the Constitution.