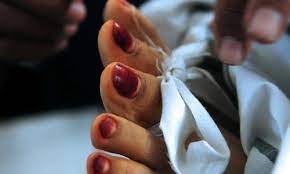 SUKKUR: A man allegedly strangulated to death his wife after declaring her a ‘Kari’ over an issue of adultery in district Kashmore.

Reports said a man, allegedly killed his wife, identified as Zinda Khatoon, after declaring her a ‘Kari’ in village Muhammad Khan Jakhrani in district Kashmore.

The police shifted the body to a local hospital for medico-legal formalities, while the accused managed to escape from the scene. The police registered a murder case against the accused and started conducting raids to arrest him.