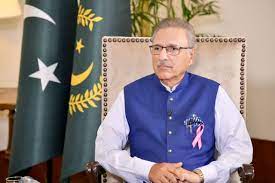 Posted by: admin in Miscellaneous News 16 days ago 0 7 Views

Islamabad: President Dr Arif Alvi on Tuesday said early diagnosis of breast cancer was the only way to save the lives of 40,000 women in the country, who fell victim to the disease in a year.

The president said removing taboos about breast cancer through strong awareness campaigns would help the women not to shy away from seeking urgent medical help.

Along with his wife Samina Alvi, the president in an interactive session with journalists of print and electronic media here at the Aiwan-e-Sadr highlighted the importance of the media’s role in sensitizing the public about breast cancer.

President Alvi said in a developing country like Pakistan, prevention was the best way to avoid expensive medical treatment of several diseases, including breast cancer.

He said it was the responsibility of the society to give more public space to women by providing them access to facilities, whether relating to education, health or a safer environment free from harassment.

The president urged the journalists to join the cause of fighting breast cancer by highlighting the topic in their content so as to make the people more aware.

Begum Samina Alvi said in view of her awareness campaign on breast cancer, the media had been effectively highlighting the subject in their television programmes and newspapers.

She said she would be visiting colleges in different cities this month to raise awareness among girls on self-diagnosis.

She also urged the male members of the family to realise the suffering attached with the disease and support women to get proper medical care.

Prime Minister’s special assistant on Health Dr Faisal Sultan said in view of the seriousness of breast cancer, there was a need to strengthen the capacity of relevant health facilities.

He mentioned that producing an increased number of oncologists and surgeons, and reducing reliance on imported medicine and technology was important in this regard.

He said the government would consider facilitating local production of drugs used in the expensive treatment such as molecular therapies.

Dr Muhammad Asad Pervez, oncologist and Consultant Shaukat Khanum Memorial Cancer Hospital said one in every eight women in Pakistan was diagnosed with breast cancer every year, meaning every such patient in 13 minutes.

Later, President Alvi and Samina Alvi responded to the queries and feedback of the journalists relating to making the awareness campaign more effective.