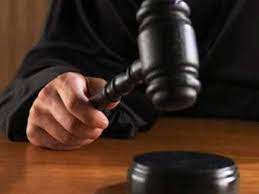 LARKANA – A local court on Wednesday awarded life imprisonment with a fine of Rs5 lac to an accused for killing his mother and injuring wife over a domestic issue. The 1st Additional Session and Model Court Judge in view of evidences found Asif Bhutto guilty of killing his mother Zebunissa Bhutto and injured his wife Naheed Bhutto by opening fire on them in 2019 within the limits of Akil police station. The judge also fined him with Rs5 lac. Rustom Bhutto, brother of the accused, had registered the murder case. The convict was sent to central prison after the announcement of the verdict.