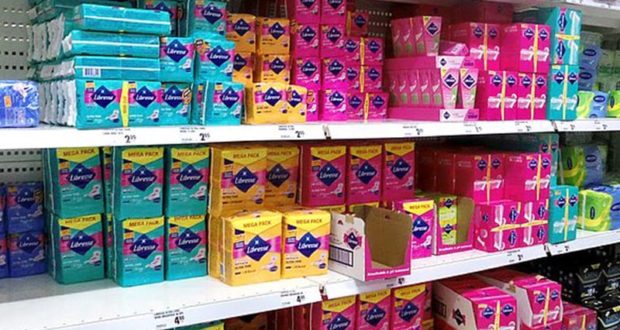 KARACHI: Back in May, an Instagram post by Tooba Bilal, a freelance photographer and activist, went viral, as a result of which more than 150 women in a village of Balochistan finally got to use a sanitary napkin for the first time in their lives.

It all started when Ms Bilal’s friend Nayab Wali, an activist with the Kareem Aman Foundation (NGO in Balochistan), told her about a problem the women in her village (Mastung district) and surrounding areas were facing — none of them had access to underwear or sanitary napkins. Instead they would lump cloth together to soak up the discharge which could potentially lead to health risks and rashes.

“These women travel three to four hours a day just to get water, they shepherd their cattle and also work at home — using a cloth for a natural bodily function is just criminal,” they said before they decided to conduct an awareness campaign for them.

After discussing the logistics, the girls decided to set their plan in action.

Ms Bilal’s initial post about the campaign got more than 200 replies and from there the momentum grew. “A lot of local and international influencers also got in touch with us to raise money for period care packages,” she said, adding that more than 150 people donated to their campaign by account transfer, EasyPaisa and cash.

While Ms Bilal (who is on her way to the University of Oxford) was in charge of collecting funds, Ms Wali was going around supermarkets and contacting companies on social media for deals on discounted sanitary napkins.

Eventually she found a retailer who offered a good price. Armed with 250 packets of pads, Ms Wali then bought 200 undergarments from a shop in Quetta. Each kit, according to Ms Bilal, had two panties and two packets of pads. By June 29, the care packages were ready.

She added that they consider sustainable options such as menstrual cups but was not sure about it as it was a hard task to convince the women to use pads instead of cloth.

“We weren’t even sure if people would donate to our campaign but we did the best we could. We want this campaign to grow and are on the lookout for more eco-friendly options,” she explained.

Talking to Dawn, Ms Wali said that talking to her family openly about the campaign was a difficult task.

“When I first introduced this project to the women of my family I was told what was the point and how would I explain the nature of my project to my maternal uncle who would accompany us on the trip, etc,” she said.

“In the end I am glad we went. I come from a family where talking about periods in front of men is prohibited,” she added.

According to Ms Wali, the village (Marav) where the awareness session was held was conservative.

“It was risky to do what we did as the men of the area are not keen on women learning about these things. I went to my village a week before the session to invite women and to arrange a location. Sometimes, it was easy to convince women but at others it was too hard. To make it acceptable for people, I told them that it was an awareness session for women’s health otherwise it would be next to impossible for the women to attend,” she added.

“A few of them were excited to have gotten pads. Some were nervous as it would difficult for them to take those pads back home or to explain to their families what they were as menstruation is still quite taboo,” said Ms Bilal while talking to Dawn about their trip which took place on June 30.

“Many women were also confused over what pads were and how to use them. During the awareness session, my friend Nayab and I explained how to use them, dispose them of, etc,” she added.

According to Ms Bilal, previously the women used cloth. She claimed that a woman attending the awareness session said that periods were not something discussed at home, particularly in front of men. “Information about menstruation and what to do for those five days is like classified information passed on from mother to daughter,” she explained.

Discussing her daily routine in the village, a woman said that life was tough. After waking up for prayers in the morning, the women make breakfast and then send their husbands off to work. This was followed by their cleaning routines and cooking for the day or looking after the children.