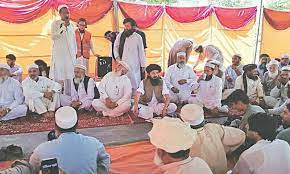 Posted by: admin in Gender Based Violence 28 days ago 0 14 Views

BAJAUR: People from different walks of life here on Sunday expressed concerns over the verdict of a jirga to ban visit of women to picnic spots and asked the government to take action against the jirga members.

The jirga organised by the local leaders of JUI-F in the hilly Danqool area of Salarzai tehsil on Saturday imposed ban on visit of women to picnic spots.

However, people of different walks of life condemned the verdict of the jirga and asked the authorities to take action against the jirga members. They said that the jirga members not only insulted the local women but also tried to challenge the writ of the government.

He asked the authorities to take notice of the issue to avoid such unlawful decisions in future.

A number of social activists have also criticised the verdict of the jirga on their social media accounts. “Who has given the authorities to the jirga members to place such unlawful ban on women in this modern era,” they questioned.

Wajid Khan, Usman Shah, Liaquat Ali Khan, Asghar Khan, Usman Khan, Aziz Khan, Khalid Khan, Mohammad Ayaub Khan and scores of others called the decision of jirga against the basic human rights and freedom of movement. Some of them described the verdict an attempt to push back women to Stone Age.

They urged the government to take notice of the unlawful decision of the jirga.

Talking to journalists here on Sunday, Assistant Commissioner Hamza Zahoor said that no one would be allowed to prevent women from visiting tourist sites in any area of the district.

“The administration has started investigation into the issue to find out in which circumstances the jirga members made the verdict,” he said.

DPO Abdul Samad Khan also said that no one could stop women from visiting picnic spots in the region.