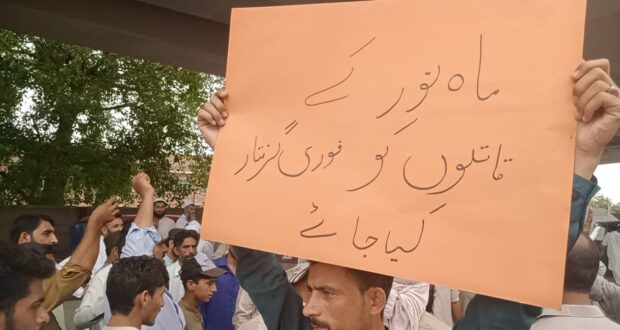 Posted by: admin in Gender Based Violence July 18, 2022 Comments Off on Another minor girl murdered in Peshawar Saddar 42 Views

PESHAWAR: A seven-year-old girl was found dead close to a mosque in Kali Bari street in the busy Saddar Bazaar on Sunday. The incident triggered concerns among the locals as it was the second incident of its kind in less than two weeks in which young girls were killed by unknown culprits in areas not very far from each other.

Police said the deceased girl was identified as Hiba. “The girl was apparently strangulated. However, the cause of the death can be confirmed after the medical report,” said an official.

The officials said the father of the girl, Zikria, told the cops that Hiba left for a tandoor in Saddar but she did not return. The family searched for the girl in the vicinity. Later, the locals found her body adjacent to a local mosque, just opposite a temple in the Kali Bari area in main Saddar.

Senior police officials, including the SSP operations, SSP investigation, and SP Cantt, visited the spot as part of investigation. Forensic experts and technical teams were also called to collect evidence from the spot.

“The CCTV footage and other pieces of evidence are being collected while geo-fencing was conducted to probe the incident from all angles,” said an official. A few days ago, an 11-year-old girl Mahnoor was killed in the Railway Quarters, not very far from Saddar. Her body bore signs of torture. The locals had later blocked the road, demanding an early arrest of the culprits. Police are still investigating the case and no major breakthrough has been reported.

2022-07-18
admin
Previous: The gender gap By Naurah Khurshid
Next: Action sought against Bajaur jirga for banning women from picnic spots