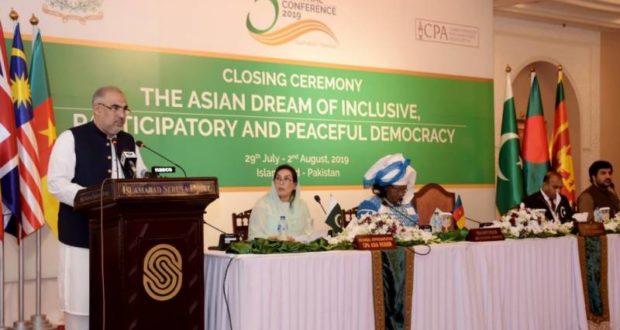 Posted by: admin in Featured, In Focus August 2, 2019 Comments Off on Women and youth vital for socio-economic development: Speaker NA Asad Qaiser 879 Views

Speaker National Assembly Asad Qaiser has said that sustainable socio-economic development is not possible unless needs of women and youth are addressed.

Addressing the Closing Plenary of the 5th CPA Asia Regional Conference held in Islamabad on Thursday, Speaker National Assembly Asad Qaiser stressed upon the Asia Region Commonwealth Members States to push their respective governments, through their legislative and oversight role, to utilize the parliamentary foresight of this forum and collaborate on these issues in light of this forum’s deliberations and recommendations.

He said that the theme of the Conference, “Envisioning Parliamentary Paths towards a Diverse and Developed South Asia” had softened the ground for healthy and target oriented debate and invited collective attention to not only our shared problems but also to mutual opportunities faced by South Asia.

The Speaker NA said that the Parliamentarians during the course of this discourse had brought to the fore all crucial challenges faced by the South Asian region and to help set the course of regional, national and provincial action.

He said that the wisdom and foresightedness reflected in the keynotes and interventions of worthy speakers had identified crucial prospects of parliamentary cooperation. He stressed the need for sustaining this meaningful parliamentary dialogue through regular parliamentary interaction.

Expressing his gratitude, Asad Qaiser said that he was extremely grateful for the vote of thanks by distinguished delegates and participants and their appreciation had indeed humbled him, his colleagues and his Secretariat. He said that this conference was in fact the joint achievement of all the participating Parliaments of the region.

The News: ‘Socio-economic uplift not possible unless needs of women, youth addressed’