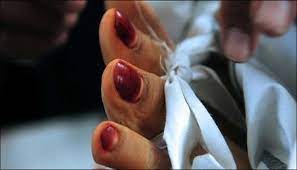 KASHMORE – A 65-year-old woman was killed over the charge of a notorious tradition of Karo-Kari in village Guhram Jakhrani near Kashmore on Friday. Accused Meghlo Jakhrani shot dead his wife Shan Bibi over the charge of Karo-Kari in village Guhram Jakhrani near Bakhapur. The accused fled to unknown destination after swift operation. The body was shifted to a Kashmore hospital for medico-legal formalities and later handed over to the heirs. The police have lodged a report and started further investigation into the incident.