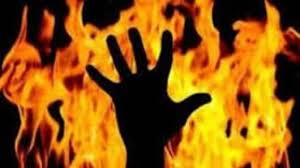 Shikarpur- A woman sustained critical burns after being set on fire by her husband allegedly over a domestic issue at Khanchanabad here on Monday.

The incident occurred in the jurisdiction of New Faujdari police. Neighbours told the police that suspect Abdus Samad poured petrol on his wife Sobia and lit the fire. Sobia stepped outside the house crying as the flames of fire had burnt 25 percent of her body.  She was rushed to Shikarpur District Headquarters (DHQ) Hospital from where she was referred to Sukkur Hospital due to her critical condition. The suspect managed to escape the scene.

2019-04-23
Web Desk
Previous: Online magazine for women launched
Next: On women in science