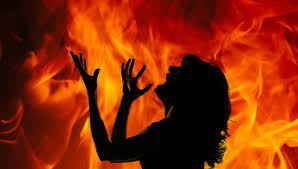 Bahawalpur: A 35-year-old woman was allegedly burnt by her in-laws at 45 DNB village about 40 kilometres from here in the Yazman police jurisdiction on Tuesday.

According to police sources, Nazia was having strained relations with in-laws and she would complain about their mistreatment. On Tuesday morning, police said, the woman’s in-laws set her ablaze by throwing petrol on her and she was taken to the Bahawal Victoria Hospital (BVH) with critical burns.

Police registered a case against the suspects and said they would make arrests soon.