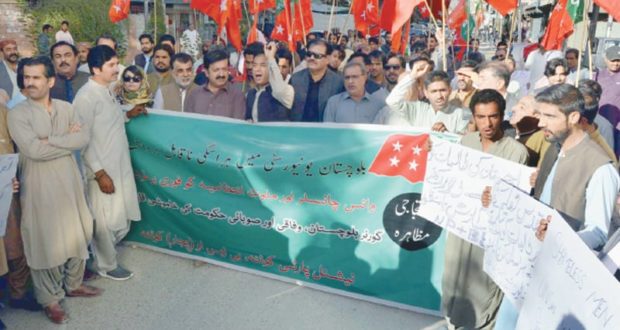 QUETTA: Dr Javed Iqbal, the vice chancellor of the University of Balochistan (BoU), has temporarily quit his office to “let the Federal Investigation Agency (FIA) complete its ‘fair’ investigation into the students’ blackmailing and harassment scandal” that has plagued the province’s oldest and most prestigious seat of higher learning.

The removal of VC Iqbal was announced through an official notification issued by the office of the Balochistan governor on Sunday.

The notification says that with a view to ensure a fair inquiry into the scandal and at the request of the BoU VC, Governor retired Justice Amanullah Khan Yasinzai — who is also chancellor of the University of Balochistan — has accepted Dr Iqbal’s request to “step down from his responsibilities” as the vice chancellor till the FIA finalise its investigation into the scandal.

Consequently, Professor Dr Mohammad Anwar Panizai has been given the charge of the VC office till further order, the notification adds.

Meanwhile, officials of the FIA which has been tasked by the Balochistan High Court (BHC) to investigate the blackmailing and harassment faced by a number of the university students — both female and male — said that the statements of “some university officials / employees” have been recorded and “a report on the episode in final stages.”

However, “not a single alleged victim” of blackmailing and harassment “has appeared before the FIA investigation team” so far, sources privy to the developments told Dawn. Nor any official / employee of the university has been arrested in this connection so far.

Also on Sunday, the National Party (NP) staged rallies and held demonstrations in different parts of Balochistan to voice its concern over the “shameful video scandal”, demanding “removal of the BoU officials involved in harassing the students”.

“This issue can’t be resolved by stepping down of the vice chancellor because the … (varsity) staff is allegedly involved in … harassing and blackmailing students, particularly girls,” said NP secretary general Jan Mohammad Buledi.

The committee set up by the Balochistan Assembly to conduct probe the scandal could not have started its work as, at its first meeting on Friday, the panel was unable to even elect its chairperson.

Balochistan Assembly Speaker Mir Abdul Qudoos Bizenjo, who had constituted the committee, had ordered it to submit its report in 10 days.

The 10-members committee held its meeting for electing the chairperson, but its members were divided over nominating a person for the position. Members from treasury benches proposed the name of Syed Ehsan Shah for the chairpersonship while the opposition members put forward the name of Sana Baloch.

After consensus could not be developed over a person for the chairpersonship, the meeting was postponed till Oct 23.