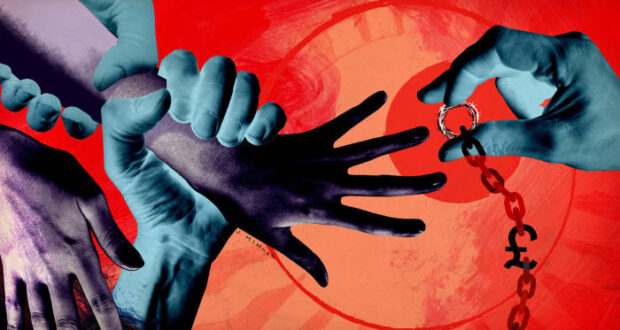 LARKANA: Two teenage girls arrived at airport police station late on Saturday night and sought protection from police against their close relatives, who, they alleged, were forcing them into marriage against their will.

Sakina Solangi and her cousin Fazila Solangi, who were both around 15 years of age, complained to police that their mothers and brothers were pressuring them to accept marriage proposals of their choice, depriving them of their right to choose their life partners.

On Sunday, the girls were shifted to Larkana women police station under tight security where they told reporters that their fathers had died. “We are underage and our brothers and elders are adamant to marry us off while we want to continue our education,” they said.

They said that they wanted to go to Karachi to reside with their aunt. “Despite our refusal, the elders have fixed the wedding date of Sakina,” they alleged. They demanded police provide them protection from their enraged relatives.

Meanwhile, the girls’ relatives, including their mothers, tried to meet them at the women police station but police refused them access to the girls.

Talking to reporters outside the police station, the relatives disclosed that the girls had left their home in Ghulam Hussain Butt village near Moenjodaro to attend circumcision ceremony of a relative in Mehar Sariyo village near Dokri.

They slipped while the ceremony was in progress and went to Dokri police station from where they were sent to the airport police station. SHOs of Airport and women police station were harassing them, they alleged.

The women police station SHO dismissed the allegation and said the SHO of airport police station had handed over the girls to her for protection as their elders intended to marry them against their will. They would be produced in the court concerned on Monday and its orders would be followed, she said.