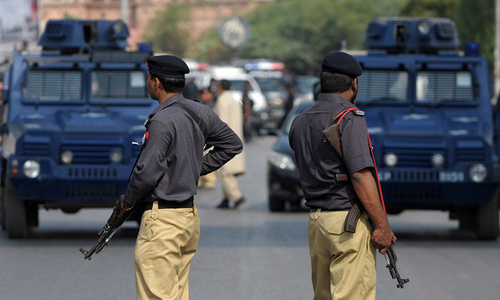 They added six men allegedly raped the woman and two of them were serving police constables posted in separate areas.

“She visited the police station with her husband and made a complaint against six men. She knew four men very well with their names and profession, but did not recognise the remaining two. According to the details of the FIR, all six men stormed into her house on the afternoon of Sept 26 when she was alone in her home and her husband was at work.”

The FIR, he said, had details of the incident, according to which the woman was subjected to sexual assault by the suspects, who also made a video of the incident with their mobile phones.

“The police after registering the FIR, traced the suspects and arrested four of them,” he added.

“It’s true that two of them are policemen and posted in different areas. The investigation is under way,” the police official added.

“The medico-legal report of the victim is expected in a day or two which will further set the course of future probe,” he added.

2019-10-02
Web Desk
Previous: Woman burnt to death
Next: Cops among six held for ‘gang-raping’ woman inside her home in Karachi