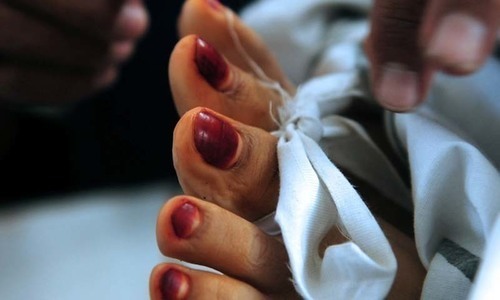 KARACHI: Amid so many challenges faced by the law enforcement agencies and the criminal justice system, killings in the name of so-called honour, or karo-kari killings, mainly in rural parts of Sindh, continue unabated as more than 70 people have lost their lives during the first six months of the current year, it emerged on Sunday.

However, investigations into majority of such cases remain inconclusive bringing no one to justice but have allowed acquittal of a few suspects.

Official figures suggested that some 78 people were killed from January to June 2019 in different parts of Sindh in the name of karo-kari leading to registration of 65 cases. However, more than 90 per cent cases were pending trial due to different reasons and in most cases the police probe had not reached to a conclusion.

“Among 78 victims, 50 were women and 28 men,” said a source citing the data. “Total 65 FIRs have been registered in different parts of Sindh for honour killings and charge sheets in 60 cases filed. Some 57 cases are still pending with no conviction in any case. However, three people have been acquitted during the process. In most cases the suspects are close relatives of the victims.”

The concern in the police hierarchy over the status of investigations into honour killing cases echoed in a recent meeting chaired by Inspector General of Police Dr Syed Kaleem Imam, who last month reviewed the progress made by police in their assignments related to karo-kari.

The Sindh IG had asked investigators to prepare a detailed report on a case-to-case basis about the release and conviction in the honour killing cases across the province.

He also directed the officials concerned to ensure that there must not be any loophole left in the investigations and the same was also adequately pursued before courts.

In the same meeting, the DIG-Sukkur was asked to take on board all stakeholders and with their consultation a proposal be developed to help end the menace of karo-kari.

Despite being highly criticised by the authorities as well as human rights organisations, the heinous trend, usually termed a part of the rural system, continues unabated. Police, however, find it hard to investigate such killings effectively, as both aggrieved and accused parties usually belong to the same family or tribe.

“Honour killing is a social problem and has its roots in the tribal culture and a mindset where women are seen as subservient to men,” said DIG-Headquarters Abdul Khaliq Shaikh.

DIG Shaikh has been heading the recently established human rights cell of the Sindh police that operates as a supervisory body responsible for focusing and emphasising safeguarding human rights while primarily dealing with cases pertaining to vulnerable communities that include women, children, minorities and transgenders.

“A long-term solution lies in changing this mindset and empowering women in society in general. As far as the criminal justice response is concerned the police department has taken several useful initiatives to deal with the menace of killings in the name of so-called honour which included execution of a project on prevention of honour killings in collaboration with UNDP and a training module for police officers have been developed to sensitise them,” he added.

He said that a centralised human rights cell had been established in the Central Police Office (CPO) to monitor such incidents or cases and the IGP had got conducted a research study by senior police officers to assess the police response and identify ways and means to improve police handling of cases.

“However, there’s a need for greater coordination between prosecution, police and judiciary as prosecutors and judges need to be trained to understand peculiarities of murder cases where motive is [so-called] honour,” said DIG Shaikh.

Both human rights organisations and legislators, however, believe that apart from the flaw in the probe and attitude of the families concerned, the police’s approach towards the ‘honour killing’ cases and overall criminal justice system need reforms.

They call for greater reforms in the laws and bringing the culprits to justice instead of blaming the culture for the brutal trend.

“In the first place, you have to treat all crime equally — if its murder then its murder,” said PPP leader Dr Nafisa Shah, who has a PhD degree in social and cultural anthropology from Oxford University.

“When it comes to law related to this subject, it’s unfortunate these laws are quite vague. They are needed to be reformed. We witnessed some legal changes first during General Musharraf government and then during the last government of Nawaz Sharif. But it needs to address whole criminal justice and one can’t blame culture or trend just for an excuse.”

She said that the changes made in the laws during two different government to address the menace of honour killings should be counted effective if there was any decline in number of such cases but this could only be called as a step forward, not a solution.

“Since all cases fall in the domain of law, we need to look at the perspective of the law,” said Dr Shah. “We need to see that how are these cases dealt with? Whatever changes were made in the law, I believe these all were partial changes. We need to look and reform the criminal justice system for better and effective results.”

Harassment scandal at school in Lahore raises alarm over safety