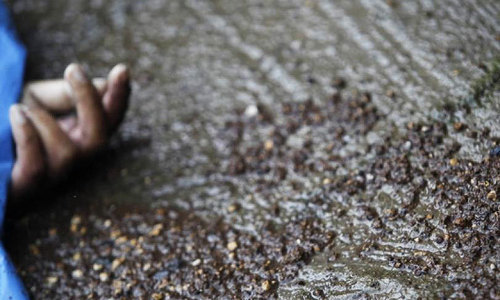 Posted by: admin in Gender, Social Issues April 15, 2019 Comments Off on Transgender person stabbed to death in Karachi 996 Views

KARACHI: A transgender person was found stabbed to death in the Tariq Road area on Saturday night, the Ferozabad police and hospital officials said.

They added that the body of the transgender person identified as Shabana, alias Ainee, 30, was found in a flat near Liberty Chowk. The corpse was taken to the Jinnah Postgraduate Medical Centre to fulfil medico-legal formalities.

Bindia, focal person for the transgender community at the social welfare department of Sindh, said that the victim, Shabana, had been living in a rented flat for the last one year.

She used to arrange dancing programmes as the police had imposed a ban on begging, although the transgender people were not part of the ‘beggars’ mafia’.

After receiving information about the murder, several transgender community members arrived at the Ferozabad police station and demanded immediate arrest of the killers.

The victim hailed from Punjab, but his family lives in Karachi.

Bindia said they made telephone contact with her brother, who had visited the Ferozabad police station for lodging a murder case and received the body for burial.

The investigators have seized the victim’s mobile phone for investigation and would obtain closed-circuit television camera footage from the busy shopping area to identify the killers, said Bindia.

She added that around four transgender persons had been murdered in the city recently.

The focal person of the Sindh government for the transgender community said that it had been their demand that skill development programmes should be launched for transgender people so that they could open their beauty parlours, etc, and earn livelihood.

The Express Tribune:Transgender person stabbed to death in her Karachi apartment