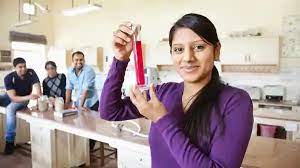 Posted by: admin in Women and Education November 26, 2022 Comments Off on Transformation through women’s education 61 Views

“No nation or country can develop unless their women and men are educated”. Sir Syed Ahmad Khan, who is our guardian in terms of education, realised that Muslim men and women could not progress unless they were educated.

So, to fulfil the demand of the hour, he established the Aligarh Muslim University. In the movement for the creation of Pakistan, Quaid-e-Azam said, “No war of independence can be fought by keeping fifty percent of the population under house arrest.” Quaid-e-Azam always kept his sister Fatima Jinnah with him as well. The independence movement also focused on women’s modern education.

On the other hand, Islam has also clearly stated regarding women’s education. According to the teachings of Islam, the mother’s lap is declared the child’s first school. Which shows how imperative it is for a woman to be educated. However, it is a matter of fact, in our society women are half of the population, so unless this half is equally involved in the affairs of the country, we cannot even dream of development.

Education and training are needed to bring women on an equal footing in political, Social, and economic development. The first thing, principally in social awareness, is education. Unless we look at women from the perspective of equals and responsible citizens, the role of educated women in the development of the country cannot be understood.

In this connection, if we take a look at the history of the revolution in the world, it shows that; most of the girls’ schools were opened immediately after the Russian Revolution. There was equal space for girls in every school, college, and university. The women’s corner was set aside not only for education but also for women in important fields of medicine, engineering, and science.

The same approach was later adopted by the countries that acknowledged the revolution.

In the modern world, After the Industrial Revolution in Europe, the importance of women was understood and they were included in every sphere of life. Quaid-i-Azam emphasised women’s education in every one of his speeches during and after the creation of Pakistan and also said that Pakistani women should take part in national development alongside men.

It should be noted, this will be possible only when we consider women as productive members of society. Being a Muslim society, other than worldly we firmly believe that Islam is a revolutionary religion. But, in our society, there is a huge need to explain and understand Islam in the right sense.

It is pertinent here to trace back the history if we go through the dark pages of the history we came to know; before Islam, there was a tribal society where girls were buried alive in the name of honour, they had no rights, which were considered the property of their male relatives, then the holy religion of Islam gave women equal rights.

Today, the population of the Islamic world is 1.2 billion, half of whom are women. Women in Muslim societies are portrayed as completely different from women around the world. In the name of Islam, an attempt is made to separate their sphere from that of men, due to which a large part of the population of the country is separated from the education and development of the country.

In my opinion, that is why these countries are lagging far behind in the race for development. In a country like ours, which is a developing and agricultural country, if the style of education is not curricular but based on training and self-accountability, then the sources of knowledge and education will be widened. The purpose of education is not just to read books but to wipe out the current poverty, ignorance, filth and diseases, and the animal instincts of our society.

The founders of Pakistan and Islam placed a high value on education. Henceforth, it is a matter of high time for our society to understand that; women’s education is a very vital channel through which to create a universal and cohesive social order.