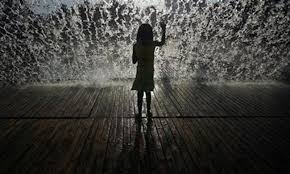 Three-year-old girl in Dadu battles for life after rape

Posted by: admin in Gender Based Violence 15 days ago 0 28 Views

DADU: A three-year-old minor girl was subjected to rape and left battling for life in Chhano Shahabad mohalla here on Wednesday.

The child, daughter of a labourer, was admitted to Dadu Civil Hospital in critical condition while police immediately arrested the rape suspect.

Dadu SSP Aijaz Ahmed Shaikh, who arrived at the hospital to enquire after the victim’s health, told journalists that the 18-year-old suspect had raped the three-year-old girl. Police led by SHO of women police station Benazir Jamali reached the victim’s house after hearing loud cries of the victim’s mother on seeing her child bleeding profusely.

He said the SHO brought the girl to gynaecological ward of the hospital. Police were interrogating the rape suspect at B-Section police station and if there were other accomplices in the sordid crime they too would be arrested and justice would be provided to the victim’s family. Gynaecologist Dr Irfana Pirzado confirmed rape with the child in initial medical report and said that she was bleeding profusely and was not out of danger yet