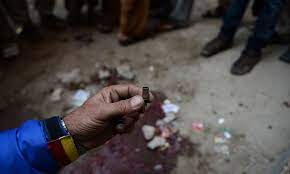 Posted by: admin in Gender Based Violence June 27, 2022 Comments Off on Suspect in child’s rape, murder case dies in encounter 42 Views

TAXILA: A religious teacher, who was accused of raping and strangling to death a 10-year-old girl in Faqeerabad area, was killed during an encounter with police on Sunday.

According to police, the suspect was in a police vehicle when it was intercepted by two armed motorcycle riders who managed to free him.

As they escaped, the suspects were intercepted near the sand mines and during an encounter with police the suspect was shot dead.

However, the motorcycle riders managed to escape. Later, his body was shifted to District Headquarters (DHQ) Hospital for autopsy.

It may be mentioned here that the Quran teacher, a native of Kohat, had confessed to having committed the crime. Later, DNA and other reports from the Punjab Forensic Science Agency, Lahore, also confirmed that the suspect was involved in the crime.