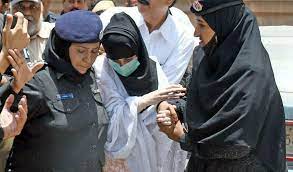 Posted by: admin in In Focus July 1, 2022 Comments Off on Sindh Police reach Lahore to bring Dua Zahra back to Karachi 31 Views

KARACHI: The Sindh Police on Wednesday reached Lahore to bring Dua Zahra back to the port city following the orders of a local court.

Dua had made headlines across the country after she mysteriously disappeared from Karachi in April but later declared that she had run away from her home to marry 21-year-old Zaheer Ahmed.

The Sindh Home Department has allowed bringing Dua back, said the investigative sources, adding that the girl will be moved back with the permission of Lahore Police and authorities.

The investigative sources said that the Sindh Police have reached Lahore to transfer the teenager back to Karachi.

A few days ago, a local court had ordered the formation of a board to conduct Dua’s medical test and to launch a further investigation into the case.