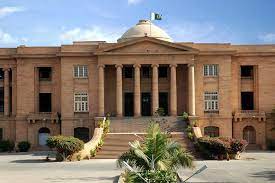 Posted by: admin in Gender Based Violence 8 days ago 0 7 Views

KARACHI: The Sindh High Court on Monday came down hard on officials of the social welfare department for not initiating criminal proceedings against an official of the Darul Aman at Sukkur for criminally assaulting inmates, and ordered the registration of an FIR against the suspect.

A single-judge bench headed by Justice Salahuddin Panhwar also directed the investigating officer to examine acts and omissions of the then director of social welfare Sukkur and the then secretary of the social welfare department and prosecute them if abetment constituted.

The bench ordered the deputy inspector general of police, Sukkur, and the district and sessions judge concerned to ensure compliance of its order.

On the last hearing, it had directed the secretary of the social welfare department to personally examine an inquiry report about rape of inmates by a senior clerk at the Darul Aman in Sukkur and take necessary legal action and submit a compliance report to the court.

At the outset of the hearing on Monday, director of administration of the social welfare department Nisar Solangi informed the bench that in compliance to its earlier order action was taken against senior clerk Muhammad Sharif, who was working in the Darul Aman Sukkur, by the director general.

He submitted that during an inquiry conducted by the district and sessions judge, the senior clerk was found involved in the rape of inmates, who included an “unsound” girl residing there and added that he had been demoted and transferred away.

The bench expressed serious resentment over the social welfare department for not lodging a case against him despite the fact that it had passed clear orders for the removal of male staff from the shelter homes and action against the delinquent officials.

The department must dare to own mistakes and failures and if such mistakes resulted in the happening of such criminal offences, the department should not hesitate in bringing the law into motion by lodging an FIR, the bench said. It added that such incidents at the Darul Aman, which was the house of safety for underprivileged women, needed to be viewed differently and the registration of FIRs against all concerned was unavoidable.

“Accordingly, this court is left with no option but to direct for lodgment of FIR against Muhammad Sharif, senior clerk, in view of an inquiry of learned district and sessions judge. The investigating officer shall also examine acts and omissions of the then director of social welfare Sukkur and the then secretary of the social welfare department, the government of Sindh,” the bench in its order said.

It further said that it had also come on record that now the Darul Amans were under the domain of the women development department and the Domestic Violence (Prevention and Protection) Act 2013 which reflected the appointment of women protection officers and psychologist in every district separately and those psychologists must be at the disposal of the magistrate concerned and officers of the women development department and the SSP.

The bench observed that any psychologists appointed and posted in civil hospitals would not be considered as having been appointed under this act, thus directions were issued earlier for the approval of schedules of new expenditures (SNEs) in that regard.

However, a deputy secretary (legal) of the finance department contended that the women development and home departments had not yet approached them and they had not received any proposal to comply with the order of the court.

The bench said that such a statement was quite surprising since the departments directed were bound to make compliance while the report of a member of the inspection team (MIT-II) also reflected that those authorities were directed repeatedly but they had not paid any heed to it.

Therefore, show-cause notices were being issued to the secretaries of the women development and home departments for May 6 and they must also appear in person with proposals of SNEs.