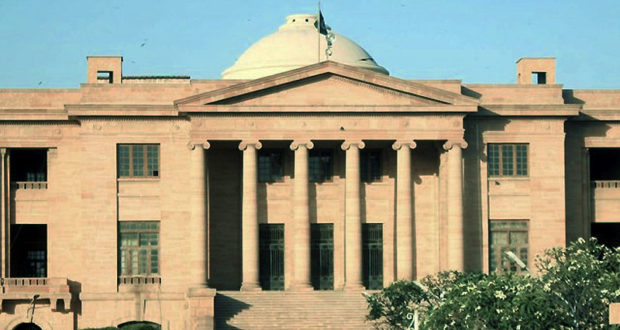 Karachi: The Sindh High Court on Friday deplored that the number of domestic violence victims was growing since the provincial authorities remained unable to properly enforce the domestic violence law enacted around six years ago.

The bench issued theses directives after dismissing an appeal of one Asad Khan who challenged his life term handed down by a trial court in 2012 for killing his wife.

The bench observed that it was a third judgement within a month wherein husband committed the murder of his wife on petty matters. It added that despite complaints of torture and maltreatment against their husbands and in-laws, the parents of victims forced them to stay with their husbands and eventually they were killed.

“The victims of domestic violence are entitled for help and support as no law allows continuity of a forced tie, but typical cultural thoughts compel the parents to send back their daughters to the houses of their husbands,” it added.

The bench in its order further stated that as per a Human Rights Watch study, between 20 and 30 per cent of women in Pakistan suffered a form of abuse while around 5,000 women were killed every year due to domestic violence and thousands of others suffered physical, psychological and sexual abuse from intimate partners.

Referring to another survey report, the SHC bench said that Pakistan was ranked the third most dangerous country for women after Afghanistan and Democratic Republic of Congo.

It further observed that the problem in all the cases was that after marriage, the family members were not helping/supporting their daughters with a fear that if their married daughters started living with them then nobody can contract marriage with their other unmarried daughters.

“But, the authorities concerned are silent spectators as no one is ready to provide protection to women in real sense. The domestic violence law was passed with an aim to help such victims, but despite lapse of a considerable period the government has failed to enforce it in letter and spirit,” it added.

It observed that the alarming figures indicated that the government had failed in giving any weight to such enactment and it was one of the reasons that typical cultural thoughts still existed and the parents of married daughters felt themselves helpless in the absence of legal assistance, which was otherwise available under the Domestic Violence (Prevention and Protection) Act.

The appellant moved the SHC against the conviction order of a sessions court, which had sentenced him to life in prison after holding him guilty of stabbing his wife, Aneela, to death at his house in Landhi in March 2009.

The father of the victim deposed before the trial court that his daughter’s husband and in-laws used to torture her and she complained to her parents time and again.

Dismissing the appeal, the bench upheld the conviction order of the trial court and observed that the prosecution successfully established its case against the appellant and his lawyer also failed to point out any illegality or serious infirmity in the judgement of the trial court.

Earlier, Assistant Prosecutor General Sagheer Ahmed Abbasi argued that the judgement of the sessions court was in accordance with law and maintained that the appellant used to maltreat his wife and an application in this regard was also moved to the town police officer Landhi by the complainant.

He further submitted that the appellant had admitted to have killed his wife in the police station and the cameraman of a news channel recorded it. The prosecution had produced the video cassette as well as examined the cameraman before the trial court and the same was admissible as evidence under Article 164 of Qanoon-i-Shahadat.