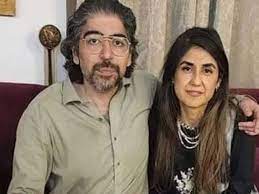 District and Sessions judge Atta Rabbani, while announcing its reserved judgment framed charges against the main accused, Shahnawaz and his mother, Sameena Shah in the Sara murder case after dismissing the co-accused Sameena’s request to be discharged from the case.

During the hearing, both the accused pleaded not guilty to the crime, while the court asked the prosecution to summon the witnesses on December 14.

At the start of the hearing, Shah’s counsel filed an application before the court requesting to discharge her from the murder case.

Shah’s lawyer Nasir Asghar while arguing before the court said that the police wrote in its challan that his client was found at the crime scene but did not mention her involvement.

“When the prosecution’s case is not against her then she should be discharged from the case,” Asghar told the court. He said that the court will have to make its final decision after going through the challan.

The lawyer of Inamur Rehman, Sarah’s father, told the court that it was also mentioned in the police record that Sarah came there after the divorce. He said that the divorce between the couple happened two days before the murder and the CCTV cameras also stopped working the same day.

The lawyer also told the court that Shah’s counsel had said that the murder happened at 9:00am but the postmortem was suggesting something else. The DVR has been seized by the police and sent for forensics, the lawyer said. He added that in the investigation it was found that Ayaz Amir, who was discharged, reported the crime to the police.