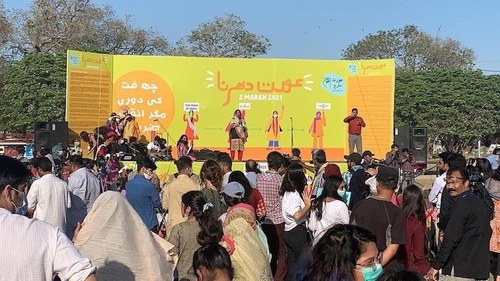 ISLAMABAD: The federal minister for religious affairs said on Sunday that an inquiry was being conducted into alleged blasphemous slogans raised at last week’s Aurat March.

In a statement, Minister for Religious Affairs and Inter-Faith Harmony Pir Noorul Haq Qadri said that Pakistan is a country of lovers of the Holy Prophet (peace be upon him) and no one could be allowed to pass blasphemous remarks.

He said the government was trying to reach the truth regarding some contents/video clips being circulated on social media, adding that those involved in the practice would be unmasked and cases would be filed against them.

The minister said the elements that “photo-shopped” banners of Aurat March and posted them on social media would also be taken to task.

The participants of Aurat March have clarified that they did not raise blasphemous slogans in their march staged on March 8 to mark International Women’s Day, and their video had been doctored to curb growing popularity of their struggle.

Says those who doctored the video will be taken to task

“The Aurat March faces severe backlash every year. Our videos and posters are targeted and manipulated, spreading misinformation and maligning the march. This year, one of our videos was doctored and heinous allegations are being placed on us,” the organisers of the march tweeted on Thursday.

They said that in the doctored video, an attempt was made to show that the participants of the march raised blasphemous slogans.

Aurat March is an annual event held in major cities of the country and has gained massive popularity during the last few years but at the same time, it has been facing backlash from the elements having a right-wing approach.

Like previous year, this year too, a campaign has been launched against Aurat March on social media.

On Saturday the Pakistan Peoples Party expressed concern over the social media campaign against Aurat March. The PPP warned against employing religion-based laws to stifle the voice of women groaning under a patriarchal mindset.

In a statement, PPP secretary general Farhatullah Babar said that the organisers of the march had not only denied false allegations levelled against them but also exposed how the footage of their demonstrations had been doctored to back lies and slander against them.

“The falsification of the images of the march, including the declaration that some participants waved the flag of a country while referring to the flag of a women’s organisation, has already been exposed in media talk shows,” he added.