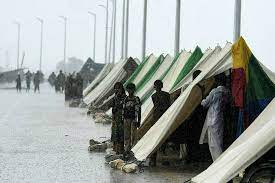 Posted by: admin in Miscellaneous News September 26, 2022 Comments Off on Pregnant women in dire need of maternal health services 32 Views

KARACHI: The pregnant women are in dire need of maternal health services in flood affected Sindh as more than 1,000 health facilities have been fully or partially destroyed across the province. In an exclusive talk with APP, Senior Medical Officer and Child Specialist Dr Nasrullah Sabki informed that around 47,000 pregnant women were affected by the torrential rains and flash floods in Sindh.

He said out of total numbers, approximately 9,500 pregnant women were being provided food supplements and anti-tetanus vaccines, registered with the health department.

He said pregnant women and newborn babies were vulnerable to a number of diseases due to unavailability of proper medical treatment and hygienic environment in the flood ravaged areas.

He said a large number of expecting women had no access to the health centres due to dilapidated infrastructure. They must be provided nearby health facilities with all necessary medicines and medical supplies so that women expecting babies could give birth in a congenial environment, he added.

Lauding the health activities of government, Pakistan Army and non-profitable organizations in the flood affected areas; Dr Sabki said the medical teams working in the field were not sufficient enough to cope with this catastrophic situation in proper manner.

He said there was an urgent need of a number of medical and paramedical staffers along with the provision of health facilities in the flood affected areas.

He urged the government and non-government organizations to further boost health activities in the flood-hit areas at this trying time.

According to the United Nations Population Fund, more than 650,000 pregnant women in flood affected areas require urgent maternal health services, with at least 73,000 women expected to give birth in September.—APP

2022-09-26
admin
Previous: 18-year-old girl burned to death by parents in Jhelum
Next: Violence against Women