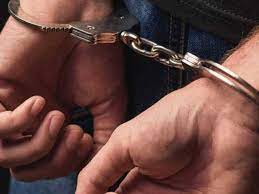 RAWALPINDI   –   Police have launched a crackdown against anti-social elements across the district and arrested a killer, four dacoits and a man involved in placing his mother under torture, informed a police spokesman on Monday. Police have registered cases against the accused and started investigation, he said.

According to him, City Police Officer (CPO) Muhammad Ahsan Younas has directed the divisional SPs to accelerate action against the criminals most wanted and other anti-social elements from the district. He said the SPs have constituted special teams under surveillance of SDPOs and asked them to net the POs and other criminals.

He added Station House Officer (SHO) Police Station (PS) Saddar Bairooni Inspector Malik Allah Yar along with his team arrested a murder suspect namely Mursalin Yasin and recovered the weapon he used to kill a man Muhammad Irfan on suspicion of having illicit relations with his wife. Police have also obtained physical remand of suspect from court, he added.

On the other hand, Sadiqabad police have rounded up a man namely Ali on charges of placing his mother under torture and filed a case against him.

According to details, CPO Muhammad Ahsan Younas, while taking notice on a video which had gone viral on social media showing a man who was torturing mother, directed SP Rawal Division Zia Uddin Ahmed to trace out the accused and arrest him. SP Zia along with his team including SHO PS Sadiqabad SI Tahir Rehman traced out the accused and apprehended him. A case was registered against the accused on complaint of his mother and further investigation is underway, the spokesman said.