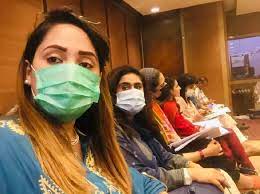 Women journalists in Pakistan are facing increasing levels of online harassment. It is more important than ever to listen to the experiences of women journalists, and look at how to stop this online abuse, writes Lubna Jerar Naqvi

In Pakistan, the rise of social media has provided journalists with greater freedom of expression, with new opportunities to expand their reach and impact. Unfortunately, this freedom has come at the expense of privacy; journalists are now more vulnerable than ever, facing online harassment and risk having their personal information compromised.

For journalists, Pakistan is an increasingly challenging country to work in. In Reporters without Borders’ 2022 World Press Freedom Index Pakistan ranked 157 out of 180 countries on protections available to journalists.

The report explains how in the period they examined, at least 12 of 86 violations perpetrated against digital media practitioners during the review period were against journalists, with at least 3 victims being women. Attacks against women journalists have increased in frequency over the past five years, prompting many women working in journalism to censor themselves, sometimes deleting their accounts entirely.

This situation is deeply problematic, but not uncommon in Pakistan. Unfortunately, these experiences are felt all over the country.

Commenting on the conditions journalists face Iqbal Khattak, the Executive Director of Freedom Network, said, “As the digital media landscape is the new horizon over Pakistan, the government is more than anxious to crack down on online freedom and digital journalists are systematic target of harassment, abuses and legal threats. We must protect our borderless Internet freedom.”

Pakistan is a highly patriarchal society, and women journalists are particularly vulnerable to online harassment and abuse including trolling, cyber-bullying, intimidation and doxing.

“Women journalists don’t speak up against online attacks because they are afraid of character assassination,” broadcast journalist and editor at rava.pk, Fahmida Yousif said. “They are already facing pressure from their family as well as society, and with so much pressure it is not easy for them to bear the added pressure of online attacks.”

Asma Shirazi is a well-known broadcast journalist and talk show host in Pakistan. As the only female journalist covering parliamentary affairs, Shirazi has had to overcome numerous challenges to carry out her work successfully.

“Online harassment is a constant tool to use against women, especially women journalists to put them under pressure,” Asma Shirazi said. “With the passage of time, I have come to know that this is such a huge psychological weapon, which is being used against journalists so that their ability to think and understand becomes affected by the increase of pressure.”

Shirazi is not afraid to ask powerful people tough questions. However, her courage means that she has faced a constant barrage of online attacks.

“For the last four years, I have been dealing with it [online harassment]. It would have been difficult but one has to bear and tackle this,” Shirazi added.  “I have not only borne and tackled it but also pushed back.”

Despite the ousting of the former President, Imran Khan, a leader who oversaw strict censorship of the media online attacks against Shirazi persist: “It is continuing even after the last government ended”, she said.

“According to them [the former PTI government], they wanted to make me an example for other journalists who are considering opposing them. Many journalists have stopped reporting and writing the truth; and have restricted expressing themselves on many social media platforms.”

Shirazi stressed that this response has been formulated to put pressure on journalists, force them to retaliate, and use their reaction to discredit their work.

“I think this is a constant weapon against journalists and this is not restricted to women only. These psychological attacks are common. I have faced them but when that didn’t work on me, they try to keep you under pressure psychologically which forces one to begin self-censoring. Many have done this.”

“And then they bring you to a point where it seems like a personal war. The space to do good and free journalism shrinks; journalists find it hard to work as they face more and more obstacles that limit their work,” Shirazi said.

According to Fahmida Yousif, Pakistan’s judicial system has little sympathy for women journalists who are victims of online harassment and abuse: “…in most cases we see women being blamed even if they are victims and this does not help, as it makes them extremely vulnerable.”

Further, Fahmida states that women journalists seldom know how to access legal support to protect themselves.

“Women lack the information and don’t know who to turn to for support – which lawyer they can go to or which platform they can use. I think women are basically afraid as they think they are alone and feel very helpless,” Fahmida said.

“They are scared of the image and character bashing that goes on through social media on which everything from your personal information like your body measurements and family is discussed.”

Unions and media organisations are an important resource for women in journalism and ensure that they know their rights and how they can access support if they face online attacks and harassment.

Nighat Dad and her organisation are one such group. Dad is a Pakistani lawyer, and Founder and Executive Director of Digital Rights Foundation (DRF), an organisation defending the rights of women journalists to free speech and privacy online.

“We [DRF] definitely have started receiving a lot of complaints from women journalists about losing their accounts, hacking accounts, targeting trivializing and targeted disinformation campaigns against them to discredit them.”

“These campaigns include not only discrediting their work also to make fake scandals against them in a sexualised manner – to sort of demonise them in a society like Pakistan.”

Speaking about the online attacks, Dad added that, “The trend that we have seen is constant – it is not a one-time thing – which is done over and over again.  It is not only restricted to online spaces, what happens is that the folks who do this design these campaigns in a very organized manner.”

“They run these campaigns specifically on Twitter with hashtags and sometimes in Urdu to avoid the algorithms which catch only English language or other main languages, so their campaigns can continue,” she went on to say.

Commenting on the targeted campaigns and how they snowball when shared by mainstream channels and their websites, Dad explained, “What happens is that when these targeted campaigns occur, many journalists reach out to us especially the ones who do TV programmes.”

“These can move to the mainstream media, particularly on to TV channels which then start posting all these fake things about those journalists in a malicious manner. But also, do it in a way to save themselves under the PEMRA Regulations.”

She added, “The way they do this is – as was seen in the campaign against Ghareeda Farooqi – is with a hashtag; they run the news [with the hashtag] at the same time – they don’t say anything defamatory against that person.”

“We provide them digital security; we escalate their complaints directly to the social media companies as well as the number (of attacks) increased drastically. And it seems that as elections are just around the corner – like maybe next year – those campaigns are actually increasing as well as hacking attempts etc.”

Online threats and attacks against women journalists came under review recently in a consultative meeting conducted by the National Commission for Human Rights (NCHR), in collaboration with the Digital Rights Foundation (DRF) and the Centre for Excellence in Journalism (CEJ).

Agha also stressed that “one of the biggest challenges in online spaces in Pakistan, evidenced by the breadth of research on the subject, is online violence and harassment.”

It is important that media organisations, unions, and other stakeholders work together to spread awareness of the issues faced by media practitioners, and provide legal, emotional, and psychological support to women in journalism who face harassment and violence. If Pakistan is to enjoy media free from censorship and violence, this is a necessary step.

Lubna Jerar Naqvi is a freelance journalist and the Pakistan Gender Coordinator of the IFJ Asia Pacific.