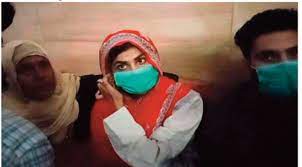 KARACHI: A session’s court on Wednesday granted bail to the husband of teenage Nimra Kazmi in a case pertaining to abduction and solemnizing underage marriage with her in Punjab.

In April, Nimra Kazmi went missing from her Karachi residence and later emerged in Punjab, where she claimed to have solemnized free-will marriage with Shahrukh Najeeb.

On Wednesday, Suspect Najeeb moved an application before Additional District and Sessions Judge (South) Faiza Khalil seeking grant of bail and his subsequent release from prison.

Granting him post-arrest bail against a surety of Rs50, 000, the judge directed the applicant to cooperate with the police in investigation.

The applicant will be released from jail on Thursday (today) since his surety deposited by him was required to be verified.

Earlier, defence counsel Muhammad Farooq argued that the girl had left her parents’ house out of her own free will in Karachi and travelled to Lahore, where she solemnized marriage with Najeeb without any fear or duress.

He submitted that while recording her statement before a judicial magistrate under Section 164 of the Criminal Procedure Code the girl had not only denied her parents’ allegation of being kidnapped by Najeeb, but also decided to go and reside with her husband being an adult of 18 year.

He argued that since their marriage was executed in Punjab, where the Sindh Child Marriage Restraint Act, 2013 was not applicable, thus Section 365-B (kidnapping with intent to rape) of the Pakistan Penal Code and Sections ¾ of the SCMRA were not applicable in the present case.

He pleaded to grant bail to the applicant, who was behind bars since his arrest from Taunsa Sharif in early May saying his continuous detention infringed his rights of personal liberty and freedom enshrined in the Constitution.