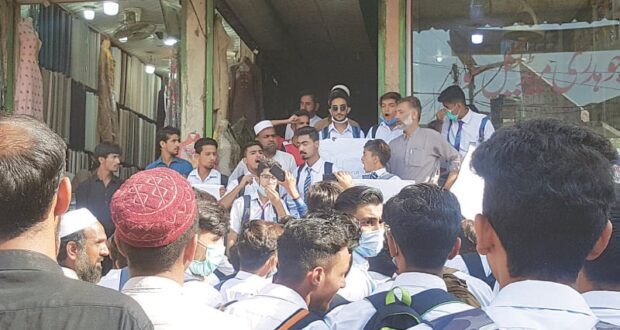 MANSEHRA: The residents of a village near here have thrown out an entire family, along with their belongings, after one of its members allegedly raped a minor girl, sources said on Wednesday.

Police have deployed a heavy contingent to the village to maintain law and order there.

According to the FIR lodged with the city police station, the suspect, who is said to be the father of several children, tricked the young victim and took her to some agriculture fields where he assaulted her.

The suspect’s brother told reporters that his family had handed over his brother to police. “If my brother is involved in such a heinous crime, we will not back him at any platform. Let the court decide his fate,” he said.

Police, however, did not confirm the suspect’s arrest.

Meanwhile, students of various schools and colleges mounted a protest against the assault on the four-year-old girl and called for public hanging of the suspect.

Enraged by rape of the minor girl, students took out a procession from Abbotta­bad road to Khatm-i-Nubu­wat chowk where a demonstration was held that was addressed by student leaders.

Speaking to the audience, one of them said the government should deal with an “iron hand” all the cases involving rape of women and assault on children which were increasing by the day.

He was of the opinion that the government should ens­ure that the affected family got justice as soon as possible and the culprit was hanged publicly so that he became an example for others.

“We cannot allow such gruesome incidents in our society where the father of many children assaults a four-year-old girl,” said another student leader.

The incident took place on September 19, when the deceased a thirteen-year-old Muhammad Ajmal left his home along with his sheep and goats to nearest cattle fields. The deceased’s family member felt alarmed when Muhammad Ajmal didn’t return home for about three hours.

The family started search for the boy and a friend of the deceased Mubarak informed the family that Ajmal’s dead body was hanging with a tree at cattle field.  During the initial investigation, police said that Ajmal was molested for two times before being murdered and torched.

Following the special directives of DIG Malakand Ijaz Khan, a special investigation team reached the spot and probed the incident.

After tireless efforts, police arrested a close relative of the deceased Waqar and presented before the media. SP Investigation said that the accused had made confession and would be dealt according to law.

2020-09-24
admin
Previous: Man arrested for ‘hanging’ teen to death
Next: New law against rapists, pedophiles on the cards