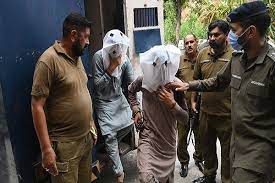 Posted by: admin in Gender Based Violence 14 days ago 0 9 Views

LAHORE: The Minar-i-Pakistan case took a surprising turn when police arrested TikToker Ayesha Akram’s associate Rambo and his seven accomplices after she alleged that he was mastermind of the incident in which a mob of about 400 men had physically assaulted her on the Independence Day and that he used to harass and blackmail her for money.

Police arrested Amir Sohail alias Rambo and seven others on the written complaint Ayesha submitted to the DIG investigations. She had nominated 13 people in it, including Rambo.

The arrested suspects have been shifted to the Lorry Adda Police Station for interrogation, a police official told this reporter on Friday.

He said Ayesha’s new statement against Rambo had baffled the investigators as earlier in the FIR and in many video statements, she had declared that Rambo had rescued her and blamed the violent mob of 400 men for the horrific episode.

In her new statement, the official said, Ayesha levelled serious allegations of blackmail and harassment against Rambo, saying he had got objectionable videos stolen from her phone. She said Rambo would use the videos to get money from her and he had obtained Rs1m from her through blackmail. She claimed that she had been paying Rambo half of her monthly salary also.

Ayesha told police that Rambo was running a TikTok gang and a man, named Badshah, was also his accomplice and main member of the ‘gang’.

In her new statement, Ayesha said Rambo had forcibly taken her to the Minar-i-Pakistan where he had already invited his friends, including Saddam Hussain, Zafar Ali, Mansab Ali, Bilal, Hussain, Mohsin Ali, Qaiser, Bilal, Azeem, Imran and Hassan, as per a plan. Ayesha said most of his friends were called from Sargodha and some were from Lahore.

“When we reached there, Rambo held me and he and his accomplices pushed me towards the violent mob,” she said.

She alleged that Rambo and his friends tore her clothes, touched her body parts and undressed her. Ayesha further said the suspects had snatched from her cash, a mobile phone and gold ornaments.

The Minar-i-Pakistan incident had got coverage in the national and international media and remained a top trend on Twitter.

On the initial FIR, police had arrested dozens of men from Punjab and some from Khyber Pakhtunkhwa.