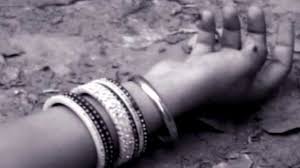 LAKKI MARWAT: A man and a woman were killed for honour in Kotka Sher Khan Sara Darga area of Bannu on Sunday.

Police said a man shot dead a female relative and her alleged paramour after finding them together in house. They said the killer escaped, and the bodies were shifted to the district headquarters hospital in Bannu city.

The police registered a case against the killer and began further investigations.

Meanwhile, relatives of a proclaimed offender, who was reportedly killed in an encounter with police in Khojari area of Bannu, staged a protest demonstration against the murder in front of the district headquarters hospital on Sunday.

The police claimed Fazal Rahim was wanted in cases of murder, attempted murder and possession of illegal arms.

Relatives of the killed outlaw placed his body on the Bannu-DI Khan Road, closing it to vehicular traffic.

They accused the police of killing Fazal Rahim in a fake encounter in Khojari area after picking him from Ghoriwala area.

DSP Sardar Khan and SHO Imranullah Khattak reached the place and got the busy road reopened to traffic after assuring protesters of all legal assistance to bring the facts to light.

He issued the directives during inspection visits to Dadiwala police station and border police posts in Darra Tang and Kurrum Par area on Sunday.

He also inspected lockups and checked the record of arrested men.

Mr Naseeb directed the cops to wear helmets and bulletproof jackets during duty hours and ensure strict checking of suspected vehicles and individuals on border posts.

He also directed SHOs and in-charge officers of police posts to treat visitors politely and ensure provision of quick relief to them.

Shuhada package: The Bannu division chapter of the paramedical association has asked the government to extend the Shuhada Package to the health staffers who died of coronavirus.

The demand was made during a meeting on Saturday with the association’s divisional president Afsar Zaman in the chair.

The participants said doctors and paramedics put their lives in danger to save people from the pandemic.

They said several physicians and health staffers had died of Covid-19 while providing healthcare to the pandemic-hit people in hospitals.

The relatives of doctors and paramedics who died of pandemic deserved to be provided all perks and privileges under the Shuhada Package, they maintained.