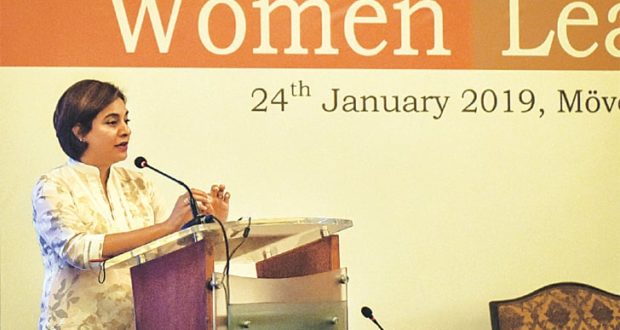 ‘Let your daughters pursue their dreams’

KARACHI: “I’ve never worked for rewards or money. I work for honour,” said Major General Shehla Baqai of Pakistan Army during her keynote address at the day-long 9th International Women Leaders Summit held at a local hotel on Thursday.

As an army doctor and gynaecologist, she said that “when women survive, nations thrive.”

Remembering her student days at the Army Medical College, she said that there used to be only 10 per cent female students and 90pc male students. “But the tables are turning now. In fact they have a 40pc quota system in place now for male students. Otherwise there would be very few male doctors in the Army,” she shared.

“The glass ceiling is all about the mindset. You set your own barriers but the sky is the limit,” she said, with a message for the parents of girls. “Don’t dictate. Let your daughters pursue their dreams and they will reach for the stars.”

Another keynote speaker, former governor of the State Bank of Pakistan Dr Shamshad Akhtar said that she grew up in the 1970s when putting a crack in or breaking the glass ceiling was harder. “We didn’t even get any mentoring. We stumbled and got up and stumbled and got up again. It was survival of the fittest,” she said.

But in the position of the governor of the SBP, she said that she was not even for a single day identified for her gender. She was identified for her work and potential. “I was seen and respected like a governor,” she was glad to report. “Still,” she said, “as women grow in careers, they do experience the glass ceiling. While hearing good stories about their success I also hear about their pain. So as entrepreneurs, I suggest you sit with them and talk to them to know about the things which are not so visible or on the surface,” she said.

A panel discussion next moderated by ophthalmologist Dr Mahnaz N. Shah saw her putting questions to male chief executive and chief operating officers about what they were doing to bring gender parity into their companies. Abrar Hasan of National Foods said that they needed to introduce progressive policies for women to feel secure in the workplace. “You need to create an environment where they can feel secure,” he said, adding that they have included a day care centre in their new office. He also said that companies needed to benchmark salaries with positions, not gender. “That’s how you create an enabling environment,” he said.

Aamir Niazi of HRSG started with an inspirational story about his grandfather who returned from England in 1903 after completing his education from Cambridge University and then after getting `married he encouraged his wife to also go to Cambridge for her tripos in English literature. Then his own mother after having his two older siblings volunteered for the Red Cross for two years. “I grew up with such behaviours, values and ethos around me to establish my own thinking for we are after all a product of our environment. The walls are everywhere but it is not mission impossible to break those walls,” he said.

Sagheer Mufti of HBL said that he felt that men were “idiots” when it came to emotional intelligence while women were champions at it. “They need to learn how to be open-minded and informed. You need that for open communication,” he said.

Later, Amena Arif, IFC country head for Sri Lanka and Maldives said that being a woman was her super power. “I am not aggressive but I need to be strong to survive in a male-dominated society,” she said, while also adding a bit of advice for her fellow women, which was not listening to advice. “You may advised to not wear dark lipstick, to wear this or that kind of clothes. Do not listen to such advice. Do whatever you are comfortable with. You need to be authentic and genuine. You need to be who you are. How you feel, how comfortable you are shows how you come across to people,” she said.

Consul General of Italy in Karachi Anna Ruffino said that she was surprised to be told to denounce her family when she had aired her wish to be a diplomat. “I was also told not to expect my husband to give up his job to move around the world with me. It was funny to be expected to choose between your career and your family if you are a woman. But it is just a mindset,” she said, adding that there was no imbalance of genders in diplomatic circles.

Group Captain Mirat Ul Ain Azizi of the Pakistan Air Force said that she stands with her head held high because she has learned to not back out in the face of adversity. “My dear ladies,” she said, “no one will come and give you strength. Find it within yourself, for it was always there,” she said.

Dr Mariam Noman, CEO of Capital Sports, Sialkot, a physician who joined her father’s business, spoke about how she helped women entrepreneurs in Sialkot realise their worth to get ahead and do more. Dr Rana El-Akhai, MD Medal Consultancy, Jordan, shared some lessons she had to learn the hard way while climbing her ladder.

Gang-rape victim agrees to give statement