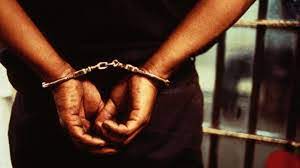 TOBA TEK SINGH: Multan Saddar land record office assistant director was arrested here on Sunday night by the city police allegedly for abducting a woman with the help of his accomplices.

In the FIR registered under sections 365-B and 511 of the PPC, complainant Sahibzada Naubahar said his relative Ayesha Bibi of Fareed Canal Colony, Multan, came to see his family at Mauza Mai Sapooran village, Kamalia.

He said that from the village, Ayesha went to Toba Tek Singh for shopping and as she came out of a shoe store on Jhang Road, Assistant Director Land Record (ADLR) Asim Rafiq, posted at Multan Saddar, and his accomplices bundled her into a car and drove away towards Jhang.

The complainant said some locals who witnessed the abduction chased the car on motorcycles, intercepted it and freed the woman from abductors.

He said they later handed the suspect, Asim, over to city police.

As per sources, the locals also thrashed the suspect before handing him over to police.

The suspect, however, told reporters he had been implicated in the case and had nothing to do with the woman’s abduction.