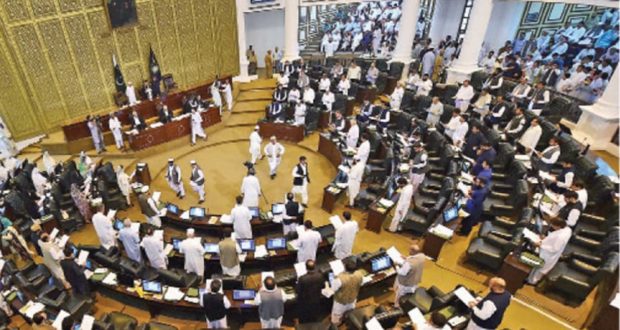 PESHAWAR: The Khyber Pakhtunkhwa Assembly on Tuesday passed an amendment to an anti-women harassment law and introduced separate oaths for Muslim and non-Muslim ombudsperson.

The government bill earlier had a single oath for the ombudsperson.

Two separate oaths for the Muslim and non-Muslim ombudsperson were included in the bill after Jamiat Ulema-i-Islam-Fazl MPA Naeema Kishwar tabled an amendment to Schedule-II of the law.

“The main purpose of the amendment was that no person of a particular non-Muslim community could assume the post in the garb of a Muslim,” clarified mover of the amendment when treasury, minorities and an MPA of Pakistan Peoples Party initially opposed it.

The treasury and opposition benches supported the amendment.

Minister for social welfare and women development Dr Hisham Inamullah moved a resolution in the house for the passage of the Khyber Pakhtunkhwa Protection against Harassment of Women at Workplace (Amendment) Bill, 2020.

Naeema Kishwar through her amendment says the ombudsperson shall take oath as: “that I am a Muslim and believe in the unity and oneness of the Almighty Allah, the Books of Allah, the Holy Quran being the last of them, the Prophethood of Mohammad (PBUH) as the last of the prophets and there can be no prophet after him, the Day of Judgment, and all the requirements and teachings of the Holy Quran and Sunnah.”

The content of the amendment triggered a debate in the house.

Opposing the contents of the amendment, she said members of minorities could also become ombudsperson like judges of the superior courts.

She said the amendment would stop minorities from becoming ombudsperson.

Minister for law and parliamentary affairs Sultan Mohammad Khan also opposed the amendment and said the Constitution did not allow discrimination on the basis of race, religion, sex and place of birth.

Speaker Mushtaq Ghani proposed two separate oaths for Muslim and non-Muslim ombudsperson that was supported by the law minister.

Ranjeet Singh of the JUI-F proposed a separate oath for minorities.

Minister Hasham Inam suggested that oath begin with the name of the Almighty Allah.

Minority MPAs from the treasury and opposition benches snubbed the JUI-F lawmaker for using ‘inappropriate’ words against non-Muslims.

They resented the remarks of Naeema Kishwar about minorities and demanded of her to withdraw them.

The speaker expunged the remarks.

Naeema Kishwar clarified that she had a lot of respect for minorities and she specifically highlighted Ahmadis. Earlier, three amendments proposed by MPA Nighat Orakzai were included in the law.

According to the amended law, a person, who is or has been working with a well reputed civil society organisations or a social welfare organisation having at least Bachelor’s or equivalent degree in law from a recognised university with at least 15 years post qualification experience could become ombudsperson besides a person who is, has been or is qualified to be a judge of the high court or a retired civil servant of known integrity having law background with at least 15 years of service.

The bill meant for the care, rehabilitation and reintegration of vagrants in the province declared that if the special magistrate finds that a person is vagrant and person shall be send to Darul Kafala for the detention for a period no exceeding three years. All offences registered under the law will be cognisable and bailable.