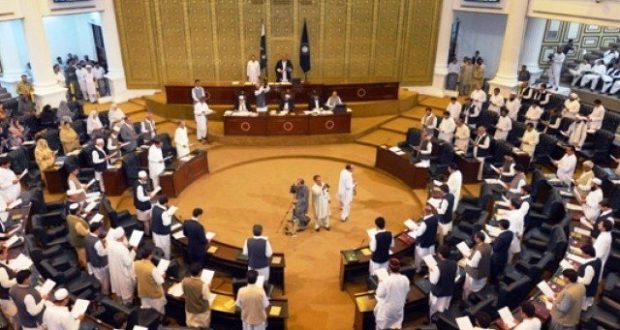 PESHAWAR:The provincial government has decided to make amendment to the Protection Against Harassment of Women at the Workplace Act, 2010 and would also table The Khyber-Pakhtunkhwa Panahgah Bill, 2020 in the provincial assembly sessions on January 13.

According to agenda items for Monday’s session available on the K-P assembly’s website, the provincial government has decided to amend the anti-harassment law to enhance the qualification of the ombudsperson.

The legislation called The Khyber=Pakhtunkhwa Protection against Harassment of Women at Workplace (Amendment) Bill, 2020 would be tabled as a draft for discussion during the assembly session on Monday.

The draft proposes age bracket of 45 and 65 years for the chairperson of the office of the ombudsperson.

As per proposed amended bill, the chairperson of the ombudsperson must have the qualification and abilities of becoming the judge of the Peshawar High Court.

Moreover, the chairperson could also be a retired public officer of known integrity having law background with at least 15 years of experience, or a person who has been a well reputed civil society organisation or a social welfare organisation having at least a bachelor or equivalent degree in law from a recognised national or international university with at least 15 years of post-qualification experience.

Various proposals from treasury and opposition benches would be accommodated into the new amended legislation meant for strengthening the anti-harassment laws.

The Muttahida Majlis-e-Amal (MMA) leader in the provincial assembly Malik Zafar Azam had submitted the amendments for making the Shahadat-e- Alamia from any national or international registered religious organisation a requirement for becoming the head of the provincial ombudsperson.

The Jamat-e-Islami leader Inyatullah Khan proposed that the ombudsperson chairperson should have the ability of becoming a high court judge or a retired civil servant should be made a pre-requisite for the post.

Inyatullah also demanded that the requirement of 15 years of experience in civil society for the post of the chairperson of the ombudsperson should be removed.

The MMA lawmaker Naeema Kishwar said a person who remained a member of the provincial assembly for five year and hold a bachelor degree could be considered as qualified for the post.

Pakistan Peoples Party lawmaker Nighat Orakzai said that the pre-conditions for the acting ombudsperson should be the same as that of the permanent.

The provincial government will table The Khyber-Pakhtunkhwa Panahgah Bill, 2020 in its upcoming session after which K-P panagha or shelter home welfare board would be established with a head office in the provincial capital.

After the bill is approved by the provincial assembly, Chief Minister Mahmood Khan would also approve names of the 10 board members with the input from the provincial welfare department.

The welfare department secretary would be appointed as director of the K-P Panahgah Welfare Board for a three-year term.

The shelter home board would be responsible for provision of shelter, food, medical facilities, and data collection of the homeless across the province. The board would have its own funds and could be authorised to take donations from local and international donors.

The board would present details of the funds in the provincial assembly while the Auditor General of Pakistan would conduct its audit.