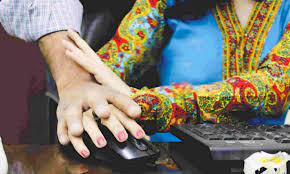 Islamabad: The anti-harassment ombudsperson of Khyber Pakhtunkhwa (KP) on Wednesday referred the harassment case of two senior female officers serving in the office of Commissioner for Afghan Refugees Peshawar to the Federal Ombudsman Secretariat

For Protection against Harassment, says a press release.

While referring the case to the Federal Ombudsman Secretariat for Protection against Harassment, the anti-harassment ombudsperson of KP, who has been a prominent human rights activist, admonished the lawyer for the accused for wasting time by using delaying tactics and agitating purely on technical grounds, and that too on concluding stage, to prolong the proceedings.

The ombudsperson had been hearing for many months a set of two identical complaints seeking strict disciplinary and legal action against the Commissioner, Chief Finance

After many hearings of the case, when the ombudsperson fixed the matter for final arguments to announce the verdict, the counsel for the accused Zartaj Gul, who was the standing counsel for the office of the Commissionerate for Afghan Refugees KP/accused, contended that the ombudsperson was not competent to hear the matter as although the complainants were employed in Peshawar,

but, in fact, they were employees of the federal government.

Expressing dismay, the ombudsperson reprimanded the lawyer observing that why he did not agitate this technical issue during preliminary hearing of the matter. However, she held that since the case had been near to conclusion, thus she would send her findings to the Federal Ombudsperson to hand down the verdict.

The complainants, who had been appearing in person, before the ombudsperson to argue their case, questioned that how the standing counsel for their office was representing the respondents (accused) as it was not the case against the office, instead it was a case against the senior officials in their personal capacity.

Meanwhile, she held that since the case had concluded, thus she would send her findings to the Federal Ombudsperson to hand down the verdict. The applications were filed under the Protection against Harassment of Women at the Workplace Act, 2010.

One of the complainants, who joined the office of the Commissionerate Afghan Refugees KP, in 2001, regretted that since the initiation of her service, she found the working environment of the office for female staffers as terrible and stressful; however, the current environment was worst.