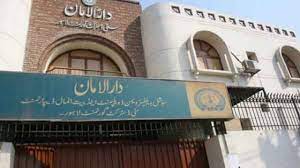 She was addressing a function after inaugurating a Darul Aman in Timergara here on Wednesday.

Dr Shams said due to absence of a Darul Aman in Timergara undertrial prisoners and victims of domestic violence from Lower Dir were kept in Swat Darul Aman. She said undertrial women prisoners from Upper Dir, Chitral and Bajaur would also be kept at the Timergara centre. She said a psychiatrist and a female teacher would be deputed at the centre. Dr Shams, who belongs to Lower Dir, said she would endeavour to provide all the needed facilities in the Timergara Darul Aman.

Meanwhile, the dispute resolution councils in Lower Dir have so far resolved 119 cases out of 200 entrusted to them during the last three months.

This was stated by district police officer Irfanullah while presiding over a meeting of the DRCs’ members from four tehsils of the district in Balambat on Wednesday.

SP investigations Mushtaq Khan was also in attendance. The meeting was informed that the DRCs resolved the cases through striking agreements between the rival parties.

The participants said people’s trust in DRCs was increasing.

They noted that out-of-court settlements were decreasing burden on courts.