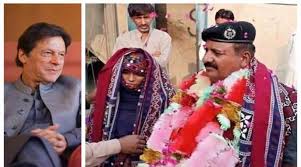 Posted by: admin in Gender Based Violence 12 days ago 0 28 Views

History is replete with instances of junior’s queueing up to pay tribute to their seniors, but the scene at the Central Police Office (CPO) of the Sindh police’s Karachi Range on Monday was one of those rare events when seniors stand in line to commend their juniors.

In stark contrast to its usually serious and quite busy environment, especially in the recent days because of the whole Sindh police chief “abduction” fiasco, the CPO appeared festive as it echoed with a marching band leading three mounted policemen.

Behind them came a horse-drawn buggy carrying Assistant Sub-Inspector (ASI) Muhammad Bakhsh Buriro, who had played a key role in rescuing a four-year-old girl in Kashmore and arresting one of her three alleged rapists.

He was accompanied by his family, including his daughter Reshma who had acted as a catalyst in bringing the ordeal of the child and her mother to an end. A government representative, senior police officers and a cricketer were already on their feet, their chests swollen with pride and their faces lit up with smiles, waiting to welcome the brave ASI and his family.

As Buriro stepped off the carriage, which was followed by another three mounted policemen, he and Sindh’s inspector general of police (IGP) saluted each other before the ceremony arranged in honor of the ASI and his family began.

IGP Mushtaq Ahmed Mahar announced a reward of Rs2 million for the ASI and his daughter. The police chief requested that the government award Buriro a Sitara-e-Shujaat and Reshma a Sitara-e-Imtiaz for their gallantry and intelligence that resulted in the arrest of the prime suspect of the Kashmore rape case.

ASI Buriro had helped arrest a man who allegedly raped a woman and her four-year-old daughter in District Kashmore. The woman from Karachi had told the police that she was duped by the suspect with a job offer.

She said that some men had released her with the demand that she bring them another girl from Karachi if she wanted her daughter to go free. The ASI’s daughter acted as a decoy and invited the suspect to a hotel. As soon as he arrived there, police arrested him.

At the CPO, Buriro grew emotional while speaking about the minor and her mother. “The woman was continuously crying when she came to me. Then I took her to my house treating her like my sister.”

He said the woman gave him two phone numbers. “I gave both the numbers to SSP sahib. The woman stayed at my house for 10 days and she kept crying all that time,” he added. “There is a Karo-Kari system in Sindh, but I enlisted the help of my own daughter. The man had asked the woman to bring him another girl if she wanted her daughter back,” he explained.

“I used my own daughter as bait to trap the rapists. The suspect spoke to my daughter over the phone and she told him she wanted a job.” The ASI said his daughter had told him not to keep his pistol on him because he is emotional. “As the suspect saw my daughter and said she is beautiful, the police party arrested him. When we searched his house, the minor was nowhere to be seen.”

Then the police found her wrapped in a dirty piece of cloth. “After we took her to the hospital, the doctor who operated on her also cried for six hours,” said Buriro, who himself could not stop his eyes from welling up.

“I would like to give a message to all the officials of the Sindh police that we should help the poor,” he said at the conclusion of his speech. Kashmore SSP Amjad Shaikh said while addressing the ceremony, “It wouldn’t have been possible to solve the case without the bravery and courage of ASI Muhammad Bakhsh Buriro, and it is a proud moment for the entire Sindh police.”

Wahab said on the occasion that he cannot find the right words to praise the brave officer of the Sindh police. “A special Sindh police team will be formed to eliminate gender-based violence while learning a lesson from this incident, and the provincial government will support the police completely,” he said.

“This is one of those proud moments that we can tell the entire world about,” said the adviser, adding that the Sindh government has already announced a cash reward for the ASI. He said the provincial administration will also write to the federal government to bestow the highest police award on ASI Buriro for the role he played in arresting one of the men suspected of raping a woman and her minor daughter in Kashmore.