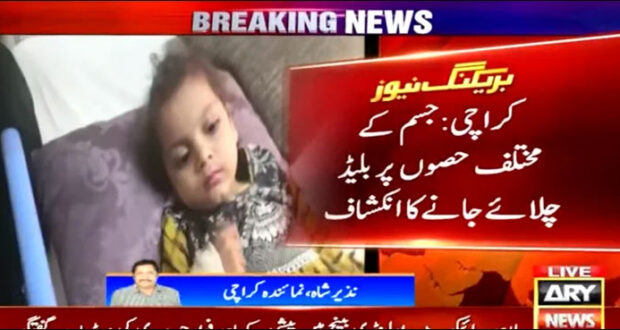 Karachi: Doctors claim parents cut their girl child with a razor blade intentionally after a 4-year-old was brought to a local hospital for treatment on Wednesday, ARY News reported.

According to details, a four-year-old girl named Ayesha was brought to the MA Jinnah hospital Karachi for treatment, when doctors found a razor blade cute on her body. The girl is a resident of the Pak colony area of Karachi.

Hospital officials, after seeing the cuts, called upon the police to investigate the matter. The police also recovered a sharp blade near the little girl.

Sources say that the girl’s parents used to torture her, and multiple cuts including on her private parts, have been found on the little girl’s body. The child protection cell also reached the hospital after the news of the incident.

2022-06-30
admin
Previous: Women can translate their ideas into business ventures if given holistic environment: Shaista
Next: Minor girl raped