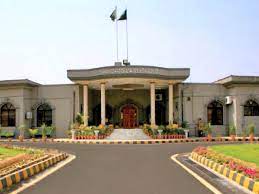 ISLAMABAD: The Islamabad High Court (IHC) has asked the capital police to submit a detailed report on a complaint filed by a woman, seeking registration of case against the husband of the assistant inspector general of police (operation) who allegedly sexually assaulted her.

The woman had also lodged an application in the office of SSP (Operation) and leveled allegation of sexual assault against the husband of AIG Operation Maria Mehmood.

In response the readers of the AIG sent a message to the complainant that SDPO Kohsar DSP Khalid Mehmood would contact her over the issue.

According to the orders issued by the court of Justice Tariq Mehmood Jahangiri, the woman had sought quashing of FIR registered against her at Aabpara police station under PPCs 506 and 34 along with 25-D Telegraph Act on Nov 13. In response SI Khalid Javed of Aabpara police station and SHO Women police station ASI Farzana Begum appeared before the court and stated that on Nov 8 an application was received by the SHO alleging that the woman visited a restaurant in Super Market Islamabad in drunken state and started threatening people there.

The woman’s mobile number was mentioned in the application, but neither any particulars nor name, address or mobile number of the complainant were mentioned on it, the court order said, adding that it was a typed application in Urdu.

The SHO of Women police station called the woman to join the investigation, however, on her refusal, FIR was registered against her, the order said, adding that the SHO and the SI, who were investigating the case, remained silent when asked why proceedings were initiated when the application did not disclose the identity of the complainant.

The woman petitioner, meanwhile, had also enclosed the copy of the application sent to SSP Operation in which allegation of sexual assault were leveled against the husband of the AIG, the court order said, adding that a message was sent to the petitioner from the mobile phone of the AIG’s reader that SDPO Kohsar Circle would contact her.

The order further said the SSP Operation was directed to submit a detailed report in writing that how criminal proceedings could be initiated on the complaint filed by an unknown person.

The SSP waa also directed to appear in person on the next date of hearing, it added.